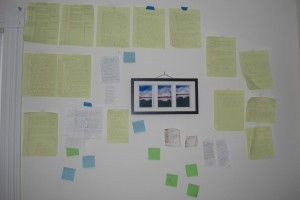 If you’re not willing to properly frame something, it’s probably not wall-worthy.

So, if a population of these relatively-average psychologists are looking to evaluate research, what are they supposed to evaluate it against? I suppose they could check and see if the results of some paper jibe with their set of personal experiences, hunches, or knowledge of previous research, but that seems to be a bit dissatisfying. Those kinds of practices would seem to make evaluations of research look more like Justice Stewart trying to define pornography: “I know [good research] when I see it”. Perhaps good research would involve projects that delivered results highly consistent with people’s personal general experiences; perhaps good research would be a project that found highly counter-intuitive or surprising results; perhaps good research would be something else still. In any case, such a practice – if widespread enough – would make the field of psychology look like grab bag of seemingly scattered and random findings. Learning how to think about one topic in psychology (say, priming) wouldn’t be very helpful when it came to learning how to think about another topic (say, learning). That’s not to say that the relatively-average psychologists have nothing helpful at all to add, mind you; just that their additions aren’t being driven by anything other than those same initial considerations, such as hunches or personal experience. Sometimes people have good guesses; in the land of psychology, however, it can be difficult to differentiate between good and bad ones a priori in many cases.

It seems like topic-to-topic issues would be hard enough for our relatively-average psychologists to deal with, but that problem becomes magnified once the topics shift outside of what’s typical for one’s local culture, and even further when topics shift outside of one’s species. Sure; maybe male birds will abandon a female partner after a mating season if the pair is unable to produce any eggs because the male birds feel a threat to their masculinity that they defend against by reasserting their virility elsewhere. On the flip side, maybe female birds leave the pair because their sense of intrinsic motivation was undermined by the extrinsic reward of a clutch of eggs. Maybe male ducks force copulations on seemingly unwilling female ducks because male ducks use rape as a tactic to keep female ducks socially subordinate and afraid. Maybe female elephant seals aren’t as combative as their male counterparts because of sexist elephant seal culture. Then again, maybe female elephant seals don’t fight as much as males because of their locus of control or stereotype threat. Maybe all of that is true, but my prior on such ideas is that they’re unlikely to end up treading much explanatory water. Applied to non-human species, their conceptual issues seem to pop out a bit better. Your relatively-average psychologist, then, ends up being rather human-centric, if not a little culture- and topic-centric as well. Their focus is on what’s familiar to them, largely because what they know doesn’t help them think about what they do not know too much.

So let’s say that our relatively-average psychologist has been tasked with designing a college-level introduction to psychology course. This course will be the first time many of the students are being formally exposed to psychology; for the non-psychology majors in the class, it may also be their last time. This limits what the course is capable of doing, in several regards, as there isn’t much information you can take for granted. The problems don’t end there, however: the students, having a less-than-perfect memory, will generally forget many, if not the majority, of the specifics they will be taught. Further, students may never again in their life encounter the topics they learned about in the intro course, even if they do retain the knowledge about them. If you’re like most of the population, knowing the structure of a neuron or who William James was will probably never come up in any meaningful way unless you find yourself at a trivia night (and even then it’s pretty iffy). Given these constraints, how is our relatively-average psychologist supposed to give their students an education of value? Our relatively-average psychologist could just keep pouring information out, hoping some of it sticks and is relevant later. They could also focus on some specific topics, boosting retention, but at the cost of breadth and, accordingly, chance of possible relevance. They could even try to focus on a series of counter-intuitive findings in the hopes of totally blowing their students’ minds (to encourage students’ motivation to show up and stay awake), or perhaps some intended to push a certain social agenda – they might not learn much about psychology, but at least they’ll have some talking points for the next debate they find themselves in. Our relatively-average psychology could do all that, but what they can’t seem to do well is to help students learn how to think about psychology; even if the information is retained, relevant, and interesting, it might not be applicable to any other topics not directly addressed. 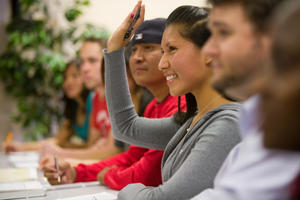 “Excuse me, professor: how will classical conditioning help me get laid?”

I happen to feel that we can do better than our relative-average psychologists when designing psychology courses – especially introductory-level ones. If we can successfully provide students with a framework to think about psychology with, we don’t have to necessarily concern ourselves with whether one topic or another was covered or whether they remember some specific list of research findings, as such a framework can be applied to any topic the students may subsequently encounter. Seeing how findings “fit” into something bigger will also make the class seem that much more interesting. Granted, covering more topics in the same amount of depth is generally preferable to covering fewer, but there are very real time constraints to consider. With that limited time, I feel that giving students tools for thinking about psychological material is more valuable than providing them findings within various areas of psychology. Specific topics or findings within psychology should be used predominately as vehicles for getting students to understand that framework; trying to do things the other way around simply isn’t viable. This will not come as a surprise to any regular reader, but the framework that I feel we ought to be teaching students is the functionalist perspective guided by an understanding of evolution by natural selection. Teaching students how to ask and evaluate questions of “what is this designed to do” is a far more valuable skill than teaching them about who Freud was or some finding that failed to replicate but is still found in the introductory textbooks.

On that front, there is both reason to be optimistic and disappointed. According to a fairly exhaustive review of introductory psychology textbooks available from 1975 to 2004 (Cornwell et al, 2005), evolutionary psychology has been gaining greater and more accurate representation: whereas the topic was almost non-existent in 1975, in the 2000s, approximately 80% of all introductory texts discussed the subject at some point.  Further, the tone that the books take towards the subject has become more neutral or positive as well, with approximately 70% of textbooks treating the topic as such. My enthusiasm of the evolutionary perspective’s representation is dampened somewhat by a few other complicating factors, however. First, many of the textbooks analyzed contained inaccurate information when the topic was covered (approximately half of them overall, and the vast majority of the more recent texts that were considered, even if those inaccuracies might appear to have become more subtle over the years). Another concern is that, even when representations of evolutionary psychology were present within the textbooks, the discussion of the topic appeared relatively confined. Specifically, it didn’t appear that many important concepts (like kin selection or parental investment theory) received more than one or two paragraphs on average, if they even got that much space. In fact, the only topic that received much coverage seemed to be David Buss’s work on mating strategies; his citation count alone was greater than all others authors within evolutionary psychology combined. As Cornwell et al (2005) put it:

These data are troubling when one considers undergraduates might conclude that EP is mainly a science of mating strategies studied by David Buss. (p.366).

So, the good news is that introductory psychology books are acknowledging that evolutionary psychology exists in greater and greater number. The field is also less likely to be harshly criticized for being something it isn’t (like genetic determinism). That’s progress. The bad news is that this information is, like many topics in introductory books appear to be, cursory, often inaccurate in at least some regards, and largely restricted to the work of one researcher within the field. Though Cornwell et al (2005) don’t specifically mention it, another factor to consider is where the information is presented within the texts. Though I have no data on hand beyond my personal sample of introductory books I’ve seen in recent years (I’d put that number around a dozen or so), evolutionary psychology is generally found somewhere in the middle of the book when it is found at all (remember, approximately 1-in-5 texts didn’t seem to even acknowledge the topic). Rather than being presented as a framework that can help students understand any topic within psychology, it seems to be presented more as just another island within psychology. In other words, it doesn’t tend to stand out. 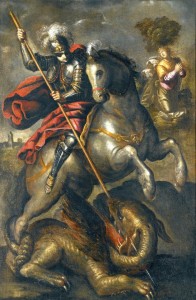 So not exactly the portrayal I had hoped for…

Now I have heard some people who aren’t exactly fans (though not necessarily opponents, either) of evolutionary psychology suggest that we wouldn’t want to prematurely close off any alternative avenues of theoretical understanding in favor of evolutionary psychology. The sentiment seems to suggest that we really ought to be treating evolutionary psychology as just another lonely island in the ocean of psychology. Of course, I would agree in the abstract: we wouldn’t want to prematurely foreclose on any alternative theoretical frameworks. If a perspective existed that was demonstrably better than evolution by natural selection and the functionalist view in some regards – perhaps for accounting for the data, understanding it, and generating predictions – I’d be happy to make use of it. I’m trying to further my academic career as much as the next person, and good theory can go a long way. However, psychology, as a field, has had about 150 years with which to come up with anything resembling a viable alternative theoretical framework – or really, a framework at all that goes beyond description – and seems to have resoundingly failed at that task. Perhaps that shouldn’t be surprising, since evolution is currently the only good theory we have for explaining complex biological design, and psychology is biology. So, sure, I’m on board with no foreclosing on alternative ideas, just as soon as those alternatives can be said to exist.

2 comments on “Welcome To Introduction To Psychology”