Violence is a strategic act. What I mean by this is that a threat to employ physical aggression against someone else unless they do what you want is one that needs to be credible to be useful. If a 5-year-old child threatened to beat up her parents if they don’t stop for ice cream, the parents understand that the child does not actually pose a real physical risk and, if push came to shove, the parents would win a physical contest; by contrast, if you happen to be hanging out with a heavy-weight MMA fighter and he demands you pull over for ice cream, you should be more inclined to take his request seriously. If you cannot realistically threaten others with credible claims of violence – if you are not likely to be able to inflict harmful costs on others physically – then posturing aggressively shouldn’t be expected to do you any favors; if anything, adopting aggressive stances you cannot back up will result in your suffering costs inflicted by others, and that’s generally an outcome to be avoided. It’s for this reason that – on a theoretical level – we should have expected research on power poses to fail to replicate: simply acting more dominant will not make you more able to actually back up those boasts, and people shouldn’t be expected to take such posturing seriously. If you apply that same logic to nonhumans – say Rams – a male who behaves dominantly will occasionally encourage another male who will challenge that dominance. If neither backs down the result is a physical conflict, and the subsequent realization that writing metaphorical checks you cannot cash is a bad idea. 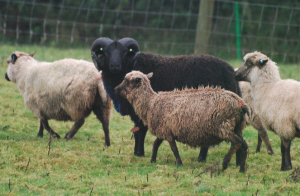 “You have his attention; sure hope you also have a thick skull, too”

This cursory analysis already suggests there might be a theoretical problem with the idea that people who are exposed to violent content in media will subsequently become more aggressive in real life. Yes, watching Rambo or playing Dark Souls might inspire some penchant for spilling fantasy blood (at least in the short term), but seeing violence doesn’t suddenly increase the advisability of your pursuing such a strategy, as you are no more likely to be able effectively employ it than you were before your exposure. Again, to place that in a nonhuman example (always a good idea when you’re dealing with psychology research to see if an idea still make sense; if it only makes sense for humans, odds are it’s lacking in interpretation), if you exposed a male ram to media depicting males aggressively slamming their horns into other males, that doesn’t suddenly mean your subject ram will be inspired to run out and challenge a rival. His chances of winning that contest haven’t changed, so why should his behavior?

Now the matter is more complex than this analysis lets on, admittedly, but it does give us something of a starting point for understanding why violent content in media – video games in particular – should not be expected to have uniform or lasting impacts on the player’s subsequent behavior. Before I get into the empirical side of this issue, however, I think it’s important I lay my potential bias on the table: I’m a gamer; have been my entire life, at least as far as I can remember. I’ve played games in all sorts of mediums – video, card, board, and sometimes combinations of those – and across a variety of genres, including violent ones. As such, when I see someone leveling accusations against one of my more cherished hobbies, my first response is probably defensive. That is, I don’t perceive people who research the link between violent games and aggression to be doing so for no particular reason; I assume they have some specific goals in mind (consciously understood or not) that center around telling other people what they shouldn’t do or enjoy, perhaps even ranging as far as trying to build a case for the censorship of such materials. As such, I’m by no means an unbiased observed in this matter, but I am also something of an expert in the subject matter as well, which can provide me with insights that others might not possess.

That disclaimer out the way, I wanted to examine some research today which examines the possibility that the relationship people have sometimes spotted between violent video game content and aggression isn’t casual (Przybylski et al, 2014; I say sometimes because apparently this link between the two is inconsistently present, possibly only short-term in nature, and the subject of some debate). The thrust of this paper focuses on the idea that human aggression (proximately) is a response to having one’s psychological needs thwarted. I think there are better ways to think about what aggression is, but this general idea is probably close enough to that truth to do us just fine. In brief, the idea motivating this paper is that people play video games (again, proximately), in part, because they provide feelings of competency and skill growth. Something about the challenges games offers to be overcome proves sufficiently motivating for players to get pleasure out of the experience. Importantly, this should hold true across gaming content: people don’t find content appealing because it is violent generally, but rather because it provides us abilities to test, display, and strengthen certain competencies. As such, manipulating the content of the games (from violent to non-violent) should be much less effective at causing subsequent aggression than manipulating the difficulty of the game (from easy/intuitive to difficult/confusing). 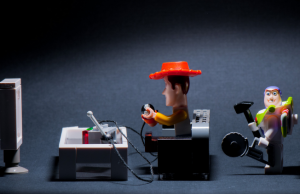 “I’ll teach him a lesson about beating me in Halo”

This is a rather important factor to consider because the content of a game (whether it is violent or not, for instance) might be related to how difficult the game is to learn or master. As such, if researchers have been trying to vary the content without paying much mind to the other factors that correlate with it, that could handicap the usefulness of subsequent interpretations. Towards that end, Przybylski et al (2014) report on the results of seven studies designed to examine just that issue. I won’t be able to go over all of them in depth, but try to provide a general adequate summary of their methods and findings. In their first study, they examined how 99 participants reacted to playing a simple but non-violent game (about flying a paper airplane through rings) or a complex but violent one (a shooter with extensive controls). The players were then asked about their change in aggressive feelings (pre- and post-test difference) and mastery of the controls. The quick summary of the results was that aggressive content did not predict change in aggression scores above and beyond the effects of frustrations over the controls, while the control scores did predict aggression.

Their second study actually manipulated the content and complexity factors (N = 101). Two versions of the same game (Half-Life 2) were created, such that one contained violent content and the other did not, while the overall environment and difficulty were held constant. Again, there were no effects of content on aggression, but there was an effect of perceived mastery. In other words, people felt angry when they were frustrated with the game; not because of the content. Their third study (N = 104) examined what happened when a non-violent puzzle game (Tetris) was modified to either contain simple or complex control interface. As before, those who had to deal with the frustrating controls were quicker to access aggressive thoughts and terms than those in the intuitive control condition. Study 4 basically repeated that design with some additional variables and found the same type of results: perceived competency in the game correlated negatively with aggression and that people become more aggressive the less they enjoyed the game, among a few other things.The fifth study had 112 participants all play a complex game that was either (a) violent or non-violent, but also gave them either (b) 10 minutes of practice time with the game or no experience with it. As expected, there was an effect of being able to practice on subsequent aggression, but no effect of violent content.

Study 6 asked participants to first submerge their arm in ice water for 25 seconds (a time period ostensibly determined by the last participant), then play a game of Tetris for a few minutes that was modified to be either easy or difficult (but not because of the controls this time). Those assigned to play the more difficult version of Tetris also reported more aggressive feelings, and assigned the next subject to submerge their arm for about 30 seconds in the ice water (relative to the 22 second average assignment in the easy group). The final study surveyed regular players about their experiences gaming over the last month and aggressive feelings, again finding that the ratings of content did not predict aggressive self-reported reactions to gaming, but frustrations with playing the game did.

“I’m going to find the developer of this game and kill him for it!”

In summation, then, violent content per se does not appear to make players more aggressive; instead, frustration and losing seem to play a much larger role. It is at this point that my experience as a gamer comes in handy, because such an insight should be readily apparent to anyone who has watched many other people play games. As an ever-expanding library of YouTube rage-quit videos document, a gamer can become immediately enraged by losing at almost any game, regardless of the content (for those of you not in the know, rage-quitting refers to aggressively quitting out of a game following a loss, often accompanied by yelling, frustrating, and broken controllers). I’ve seen people losing their minds over shooters, sports games, card games, board games, and storming off while shouting. Usually such outbursts are short-term affairs – you don’t see that person the next day and notice they’re visibly more aggressive towards others indiscriminately – but the important part is that they almost always occur in response to losses (and usually losses deemed to be unfair, in some sense).

As a final thought, in addition to the introductory analysis and empirical evidence presented here, there are other reasons one might not predict that violent content per se would be related to subsequent aggression even if one wants to hold onto the idea that mere exposure to content is enough to alter future behavior. In this case, most of the themes found within games that have violent content are not violence and aggression as usually envisioned (like The Onion‘s piece on Close Range: the video game about shooting people point blank in the face). Instead, those themes usually focus on the context in which that violence is used: defeating monsters or enemies that threaten the safety of you or others, killing corrupt and dangerous individuals in positions of power, or getting revenge for past wrongs. Those themes are centered more around heroism and self-defense than aggression for the sake of violence. Despite that, I haven’t heard of many research projects examining whether playing such violent games could lead to increased psychological desires to be helpful, or encourage people to take risks to save others from suffering costs.