Disgust is triggered off not primarily by the sensory properties of an object, but by ideational concerns about what it is, or where it has been…The first law, contagion, states that “things which have once been in contact with each other continue ever afterwards to act on each other”…When an offensive (or revered) person or animal touches a previously neutral object, some essence or residue is transmitted, even when no material particles are visible. – Haidt et al. (1997, emphasis theirs).

Play time is over; it’s time to return to the science and think about what we can learn of human psychology from the Tucker Max and Planned Parenthood incident. I’d like to start with a relevant personal story. A few years ago I was living in England for several months. During my stay, I managed to catch my favorite band play a few times. After one of their shows, I got a taxi back to my hotel, picked up my guitar from my room, and got back to the venue. I waited out back with a few other fans by the tour bus. Eventually, the band made their way out back, and I politely asked if they would mind signing my guitar. They agreed, on the condition that I not put it on eBay (which I didn’t, of course), and I was soon the proud owner of several autographs. I haven’t played the guitar since for fear of damaging it. 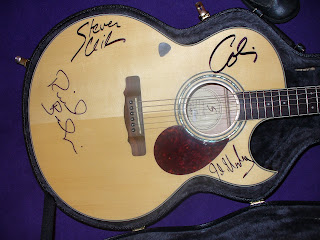 This is my guitar; there are many like it, but this one is mine…and some kind of famous people wrote on it once.

My behavior, and other similar behavior, is immediately and intuitively understandable by almost all people, especially anyone who enjoys the show Pawnstars, yet very few people take the time to reflect on just how strange it is. By getting the signatures on the guitar, I did little more than show it had been touched very briefly by people I hold in high esteem. Nothing I did fundamentally altered the guitar in anyway, and yet somehow it was different; it was distinguished in some invisible way from the thousands of others just like it, and no doubt more valuable in the eyes of other fans. This example is fairly benign; what happened with Planned Parenthood and Tucker Max was not. In that case, the result of such intuitive thinking was that a helpful organization was out $500,000 and many men and women lost access to their services locally. Understanding what’s going on in both cases better will hopefully help people not make mistakes like that again. It probably won’t, but wouldn’t it be nice if did?

The first order of business in understanding what happened is to take a step back and consider the universal phenomenon of disgust. One function of our disgust psychology is to deal with the constant threat of microbial and parasitic organisms. By avoiding ingesting or contacting potentially contaminated materials, the chances of contracting costly infections or harmful parasites are lowered. Further, if by sheer force of will or accident a disgusting object is actually ingested, it’s not uncommon for a vomiting reaction to be triggered, serving to expel as much of the contaminant as possible. While a good portion of our most visceral disgust reactions focus on food, animals, or bodily products, not all of them do; the reaction extends into the realm of behavior, such as deviant sexual behavior, and perceived physical abnormalities, like birth defects or open wounds. Many of the behaviors that trigger some form of disgust put us in no danger of infection or toxic exposure, so there must be more to the story than just avoiding parasites and toxins.

One way Haidt et al. (1997) attempt to explain the latter part of this disgust reaction is by referencing concerns about humans being reminded of their animal nature, or thinking of their body as a temple, which are, frankly, not explanations at all. All such an “explanation” does is push the question back a step to, “why would being reminded of our animal nature or profaning a temple cause disgust?” I feel there are two facts that stand out concerning our disgust reaction that help to shed a lot of light on the matter: (1) disgust reactions seem to require social interaction to develop, meaning what causes disgust varies to some degree from culture to culture, as well as within cultures, and (2) disgust reactions concerning behavior or physical traits tend to focus heavily on behaviors or traits that are locally abnormal in some way. So, the better question to ask is: “If the function of disgust is primarily related to avoidance behaviors, what are the costs and benefits to people being disgusted by whatever they are, and how can we explain the variance?” This brings us nicely to the topic of Hitler. 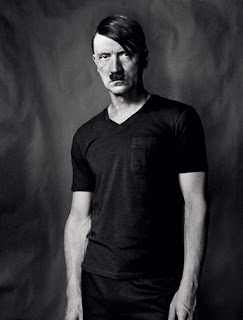 As Haidt et al. (1997) note, people tend to be somewhat reluctant to wear used clothing, even if that clothing had been since washed; it’s why used clothing, even if undamaged, is always substantially cheaper than a new, identical article. If the used clothing in question belonged to a particularly awful person – in this case, Hitler – people are even less interested in wearing it. However, this tendency is reversed for items owned by well-liked figures, just like my initial example concerning my guitar demonstrated. I certainly wouldn’t let a stranger draw on my guitar, and I’d be even less willing to let someone I personally disliked give it a signature. I could imagine myself even being averse to playing an instrument privately that’s been signed by someone I disliked. So why this reluctance? What purpose could it possibly serve?

One very plausible answer is that the core issue here is signaling, as it was in the Tucker Max example. People are morally disgusted by, and subsequently try and avoid, objects or behaviors that could be construed as sending the wrong kind of signal. Inappropriate or offensive behavior can lead to social ostracism, the fitness consequences of which can be every bit as extreme as those from parasites. Likewise, behavior that signals inappropriate group membership can be socially devastating, so you need to be cautious about what signal you’re sending. One big issue that people need to contend with is that signals themselves can be interpreted many different ways. Let’s say you go over to a friend’s house, and find a Nazi flag hanging in the corner of a room; how should you interpret what you’re seeing? Perhaps he’s a history buff, specifically interested in World War II; maybe a relative fought in that war and brought the flag home as a trophy; he might be a Nazi sympathizer; it might even be the case that he doesn’t know what the flag represents and just liked the design. It’s up to you to fill in the blanks, and such a signal comes with a large risk factor: not only could an interpretation of the signal hurt your friend, it could hurt you as well for being seen as complicit in his misdeed.

Accordingly, if that signaling model is correct, then I would predict that signal strength and sign should tend to outweigh the contagion concerns, especially if that signal can be interpreted negatively by whoever you’re hoping to impress. Let’s return to the Hitler example: the signaling model would predict that people should prefer to publicly wear Hitler’s actual black V-neck shirt (as it doesn’t send any obvious signals) over wearing a brand new shirt that read “I Heart Hitler”. This parallels the Tucker Max example: people were OK with the idea of him donating money so long as he did so in a manner that kept his name off the clinic. Tucker’s money wasn’t tainted because of the source as much as it was tainted because his conditions made sure the source was unambiguous. Since people didn’t like the source and wanted to reject the perceived association, their only option was to reject the money.

This signaling explanation also sheds light on why the things that cause disgust are generally seen as, in some way, abnormal or deviant. Those who physically look abnormal may carry genes that are less suited for the current environment, or be physically compromised in such a way as it’s better to avoid them than invest in them. Those who behave in a deviant, inappropriate, or unacceptable manner could be signaling something important about their usefulness, friendliness, or their status as a cooperative individual, depending on the behavior. Disgust of deviants, in this case, helps people pick which conspecifics they’d be most profitably served by, and, more generally, helps people fit into their group. You want to avoid those who won’t bring you much reward for your investment, and avoid doing things that get on other people’s bad side. Moral disgust would seem to serve both functions well. 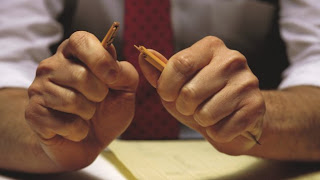 Which is why I now try and make new friends over mutual hatreds instead of mutual interests.

Now returning one final time to the Planned Parenthood issue, you might not like the idea of Tucker Max having his name on a clinic because you don’t like him. I understand that concern, as I wouldn’t like to play a guitar that was signed by members of the Westboro Baptist Church. On that level, by criticizing those who don’t like the idea of a Tucker Max Planned Parenthood clinic, I might seem like a hypocrite; I would be just as uncomfortable in a similar situation. There is a major difference between the two positions though, as a quick example will demonstrate.

Let’s say there’s a group of starving people in a city somewhere that you happen to be charge of. You make all the calls concerning who gets to bring anything into your city, so anyone who wants to help needs to go through you. In response to the hunger problem, the Westboro Baptist Church offers to donate a truck load of food to those in need, but they have one condition: the truck that delivers the food will bear a sign reading “This food supplied courtesy of the Westboro Baptist Church”. If you dislike the Church, as many people do, you have something of a dilemma: allow an association with them in order to help people out, or turn the food away on principle.

For what it’s worth, I would rather see people eat than starve, even if it means that the food comes from a source I don’t like. If your desire to help the starving people eat is trumped by your desire to avoid associating with the Church, don’t tell the starving people you’re really doing it for their own good, because you wouldn’t be; you’d be doing it for your own reasons at their expense, and that’s why you’d be an asshole.