Continuing with the trend from my last post, I wanted to talk a bit more about altruism today. Having already discussed that people do, in fact, appear to engage in altruistic behaviors and possess some cognitive mechanisms that have been selected for that end, I want to move into discussing the matter of the variance in altruistic inclinations. That is to say that people – both within and between populations – are differentially inclined towards altruistic behavior, with some people appearing rather disinterested in altruism, while others appear quite interested in it. The question of interest for many is how those differences are to be explained. One explanatory route would be to suggest that the people in question have, in some sense, fundamentally different psychologies. A possible hypothesis to accompany that explanation might go roughly as follows: if people have spent their entire lives being exposed to social messages about how helping others is their duty, their cognitive mechanisms related to altruism might have developed differently than someone who instead spent their life being exposed to the opposite message (or, at least, less of that previous one). On that note, let’s consider the topic of welfare. 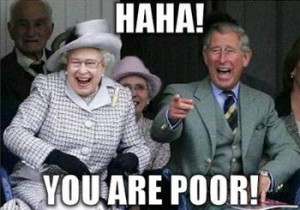 In a more academic fashion, if you don’t mind…

The official website of Denmark suggests that such a message of helping being a duty might be sent in that country, stating that:

Provided that this statement accurately characterizes what we would consider the typical Danish stance on welfare, one might imagine that growing up in such a country could lead individuals to develop substantially different views about welfare than, say, someone who grew up in the US, where opinions are quite varied. In my non-scientific and anecdotal experience, while some in the US might consider the country a welfare state, those same people frequently seem to be the ones who think that is a bad thing; those who think it’s a good thing often seem to believe the US is not nearly enough of a welfare state. At the very least, the US doesn’t advertise a unified belief about welfare on its official site.

On the other hand, we might consider another hypothesis: that Danes and Americans don’t necessarily possess any different cognitive mechanisms in terms of their being designed for regulating altruistic behavior. Instead, members of both countries might possess very similar underlying cognitive mechanisms which are being fed different inputs, resulting in the different national beliefs about welfare. This is the hypothesis that was tested by Aaroe & Petersen (2014). The pair make the argument that part of our underlying altruistic psychology is a mechanism that functions to determine deservingness. This hypothetical mechanism is said to use inputs of laziness: in the presence of a perceived needy but lazy target, altruistic inclinations towards that individual should be reduced; in the presence of a needy, hard-working, but unlucky individual, these inclinations should be augmented. Thus, cross-national differences, as well as within-group differences, concerning support for welfare programs should be explained, at least in part, by perceptions of deservingness (I will get to the why part of this explanation later).

Putting those ideas together, two countries that differ on their willingness to provide welfare should also differ on their perceptions of the recipients in general. However, there are exceptions to every rule: even if you believe (correctly or incorrectly) that group X happens to be lazy and undeserving of welfare, you might believe that a particular member of group X bucks that trend and does deserve assistance. This is the same thing as saying that while men are generally taller than women, you can find exceptions where a particular woman is quite tall or a man quite short. This leads to a corollary prediction,that Aaroe & Petersen examine: despite decades of exposure to different social messages about welfare, participants from the US and Denmark should come to agree on whether or not a particular individual deserves welfare assistance.

Never have I encountered a more deserving cause

The authors sampled approximately 1000 participants from both the US and Denmark; a sample designed to be representative of their home country’s demographics. That sample was then surveyed on their views about people who receive social welfare via a free-association task in which they were asked to write descriptors of those recipients. Words that referred to the recipients’ laziness or poor luck were coded to determine which belief was the more dominant one (as defined by lazy words minus unlucky one). As predicted, the lazy stereotype was dominant in the US, relative to Denmark, with Americans listing an average of 0.3 more words referring to laziness than luck; approximately four-times the size from Denmark, in which these two beliefs were more balanced.

In line with that previous finding was the fact that Americans were also more likely to support the tightening of welfare restrictions (M = 0.57) than the Danes (M = 0.49, scale 0-1). However, this difference between the two samples only existed under the condition of informational uncertainty (i.e., when participants were thinking about welfare recipients in general). When presented with a welfare recipient who was described as the victim of a work-related accident and motivated to return to work, the US and Danish citizens both agreed that welfare for restrictions for people like that person should not be tightened (M = 0.36 and 0.35 respectively); when this recipient was instead described as able-bodied but unmotivated to work, the Americans and Danes once again agreed, suggesting that welfare restrictions should be tightened for people like him (M = 0.76 and 0.79). In the presence of more individualizing information, then, the national stereotypes built over a lifetime of socialization appear to get crowded out, as predicted. All it took was about two sentences worth of information to get the US and Danish citizens to agree. This pattern of data would seem to support the hypothesis that some universal psychological mechanisms reside in both populations, and their differing views tend to be the result of their being fed different information.

This brings us to the matter of why people are using cues to laziness to determine who should receive assistance, which is not explicitly addressed in the body of the paper itself. If the psychological mechanisms in question function to reduce the need of others per se, laziness cues should not be relevant. Returning to the example from my last post, for instance, mothers do not tend to withhold breastfeeding from infants on the basis on whether those infants are lazy. Instead, breastfeeding seems better designed to reduce need per se in the infants. It’s more likely that mechanisms responsible for determining these welfare attitudes are instead designed to build lasting friendships (Tooby & Cosmides, 1996): by assisting an individual today, you increase the odds they will be inclined to assist you in the future. This altruism might be especially relevant when the individual is in more severe need, as the marginal value of altruism in such situations is larger, relative to when they’re less needy (in the same way that a very hungry individual values the same amount of food more than a slightly hungry one; the same food is simply a better return on the same investment when given to the hungrier party). However, lazy individuals are unlikely to be able to provide such reciprocal assistance – even if they wanted to – as the factors determining their need are chronic, rather than temporary. Thus, while both the lazy and motivated individual are needy, the lazy individual is the worse social investment; the unlucky one is much better.

In this case, then, perceptions of deservingness appear to be connected to adaptations that function to build alliances. Might perceptions of deservingness in other domains serve a similar function? I think it’s probable. One such domain is the realm of moral punishment, where transgressors are seen as being deserving of punishment. In this case, if victimized individuals make better targets of social investment than non-victimized ones (all else being equal), then we should expect people to direct altruism towards the former group; when it comes to moral condemnation, the altruism takes the form of assisting the victimized individual in punishing the transgressor. Despite that relatively minor difference, the logic here is precisely the same as my explanation for welfare attitudes. The moral explanation would require that moral punishment contains an alliance-building function. When most people think morality, they don’t tend to think about building friendships, largely owing to the impartial components of moral cognitions (since impartiality opposes partial friendships). I think that problem is easy enough to overcome; in fact, I deal with it in an upcoming paper (Marczyk, in press). Then again, it’s not as if welfare is an amoral topic, so there’s overlap to consider as well.

References: Aaroe, l. & Petersen, M. (2014). Crowding out culture: Scandinavians and Americans agree on social welfare in the face of deservingness cues. The Journal of Politics, 76, 684-697.

Tooby, J. & Cosmides, L. (1996). Friendship and the banker’s paradox: Other pathways to the evolution of adaptations for altruism. Proceedings of the British Academy, 88, 119-143.