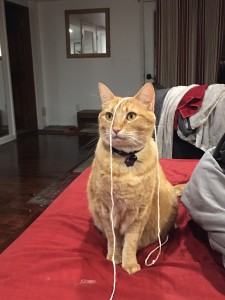 My cat displays a downright irrational behavior: she enjoys stalking and attacking pieces of string. I would actually say that this behavior extends beyond enjoying it the point of actively craving it. It’s fairly common for her to meow at me until she gets my attention before running over to her string and sitting by it, repeating this process until I play with her. At that point, she will chase it, claw at it, and bite it as if it were a living thing she could catch. This is irrational behavior for the obvious reason that the string isn’t prey; it’s not the type of thing it is appropriate to chase. Moreover, despite numerous opportunities to learn this, she never seems to cease this behavior, continuing to treat the string like a living thing. What could possibly explain this mystery?

If you’re anything like me, you might find that entire premise rather silly. My cat’s behavior only looks irrational when compared against an arguably-incorrect frame of reference; one in which my cat ought to only chase things that are alive and capable of being killed/eaten. There are other ways of looking at the behavior which make it understandable. Let’s examine two such perspectives briefly. The first of these is that my cat is – in some sense – interested in practicing for future hunting. In much the same way that people might practice in advance of a real event to ensure success, my cat may enjoy chasing the string because of the practice it affords her for achieving successful future hunts. Another perspective (which is not mutually exclusive) is that the string might give off proximate cues that resemble those of prey (such as ostensibly self-directed movement) which in turn activate other cognitive programs in my cat’s brain associated with hunting. In much the same way that people watch cartoons and perceive characters on the screen, rather than collections of pixels or drawings, my cat may be responding to proximate facsimiles of cues that signaled something important over evolutionary time when she sees strings moving.

The point of this example is that if you want to understand behavior – especially behavior that seems strange – you need to place it within its proper adaptive context. Simply calling something irrational is usually a bad idea for figuring out what is going on, as no species has evolved cognitive mechanisms that exist because they encouraged that organism to behave in irrational, maladaptive, or otherwise pointless ways. Any such mechanism would represent a metabolic cost endured for either no benefit or a cost, and those would quickly disappear from the population, outcompeted by organisms that didn’t make such silly mistakes. 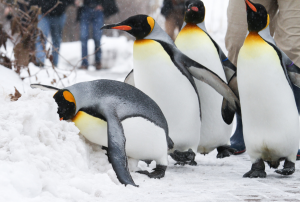 Today I wanted to examine one such behavior that gets talked about fairly regularly: what is referred to as the sunk-cost fallacy (implying a mistake is occurring). It refers to cases where people make decisions based on previous investments, rather than future expected benefits. For instance, if you happened to have a Master’s degree in a field that isn’t likely to present you with a job opportunity, the smart thing to do (according to most people, I imagine) would be to cut your losses and find a new major in a field that is likely to offer work. The sunk-cost fallacy here might represent saying to yourself, “Well, I’ve already put so much time into this program that I might as well put in more and get that PhD,” even though committing further resources is more than likely going to be a waste. In another case, you might sometimes continuing to pour money into a failing business venture because they had already invested most of their life savings. In fact, the tendency to invest in such projects is usually predictable by how much was invested in the past. The more you already put in, the more likely you are to see it through to its conclusion. I’m sure you can come up with your own examples of this from things you’ve either seen or done in the past.

On the face of it, this behavior looks irrational. You cannot get your previous investments back, so why should they have any sway over future decision making? If you end up concluding that such behavior couldn’t possibly be useful – that it’s a fallacious way of thinking – there’s a good chance you haven’t thought about it enough yet. To begin understanding why sunk costs might factor into decision making, it’s helpful to start with a basic premise: humans did not evolve in a world where financial decisions – such as business investments – were regularly made (if they were made at all). Accordingly, whatever cognitive mechanisms underlie sunk-cost thinking likely have nothing at all to do with money (or the pursuit of degrees, or other such endeavors). If we are using cognitive mechanisms to manage tasks they did not evolve for solving, it shouldn’t be surprising that we see some strange decisions cropping up from time to time. In much the same way, cats are not adapted to worlds with toys and strings. Whatever cognitive mechanism impels my cat to chase them, it is not adapted for that function.

So – when it comes to sunk costs – what might the cognitive mechanisms leading us to make these choices be designed to do? While humans might not have done a lot of financial investing over our evolutionary history, we sure did a lot of social investing. This includes protecting, provisioning, and caring for family members, friends, and romantic partners who in turn do the same for you. Such relationships need to be managed and broken off from time to time. In that regard, sunk costs begin to look a bit different. 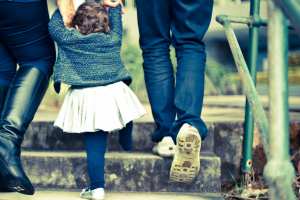 “Well, this one is a dud. Better to cut our losses and try again”

On the empirical end, it has been reported that people respond to social investments in a different way than they do financial ones. In a recent study by Hrgović & Hromatko (2017), 112 students were asked to respond to a stock market task and a social task. In the financial task, they read about a hypothetical investment they had made in their own business, but they had been losing value. The social tasks were similar: participants were told they had invested in a romantic partner, a sibling, and a friend. All were suffering financial difficulties, and the participant had been trying to help. Unfortunately, the target of this investment hadn’t been pulling themselves back up, even turning down job offers, so the investments were not currently paying off. In both the financial and social tasks, participants were then given the option to (a) stop investing in them now, (b) keep investing for another year only, or (c) keep investing indefinitely until the issue was resolved. The responses and time to response were recorded.

When it came to the business investment, about 40% of participants terminated future investments immediately; when it came to the numbers social contexts, these were about 35% in the romantic partner scenario, 25% in the sibling context, and about 5% in the friend context. The numbers for investing another year were about 35% in the business context, 50% in the romantic, and about 65% in the sibling and friend conditions. Finally, about 25% of participants would invest indefinitely in the business, 10% in the romantic partner, 5% in the sibling, and 30% in the friendship. In general, the picture that emerges is that people were willing to terminate the business investments much more readily than the social ones. Moreover, the time it took to make a decision was also longer in the business context, suggesting that people found the decision to continue investing in social relationships easier. Phrased in terms of sunk costs, people appeared to be more willing to factor those into the decision to keep investing in social relationships. 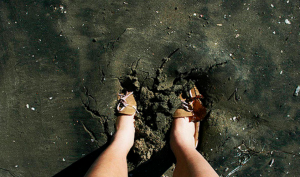 The question remains as to why that might be? Part of that answer no doubt involves opportunity costs. In the business world, if you want to invest your money into a new venture, doing so is relatively easy. Your money is just as green as the next person’s. It is far more difficult to just go out into the world and get yourself a new friend, sibling, or romantic partner. Lots of people already have friends, families, and friendships and aren’t looking to add to that list, as their investment potential in that realm is limited. Even if they are looking to add to it, they might not be looking to add you. Accordingly, the expected value of finding a better relationship needs to weighed against the time it takes to find it, as well as the degree of improvement it would likely yield. If you cannot just go out into the world and find new relationships with ease, breaking off an existing one could be more costly when weighed against the prospect of waiting it out to see if it improves in the future.

There are other factors to consider as well. For instance, the return on social investment may often not be all that immediate and, in other cases, might come from sources other than the person being invested in. Taking those in order, if you break off social investments with others at the first sign of trouble – especially deeper, longer-lasting relationships – you may develop a reputation as a fair-weather friend. Simply put, people don’t want to invest and be friends with someone who is liable to abandon them when they need it most. We’d rather have friends who are deeply and honestly committed to our welfare, as those can be relied on. Breaking off social relationships too readily demonstrates to others that one is not that appealing as a social asset, making you less likely to have a place in their limited social roster.

Further, investing in one person is also to invest in their social network. If you take care of a sick child, you’re not going to hope that the child will pay you back. Doing so might ingratiate you to their parents, however, and perhaps others as well. This can be contrasted with investing in a business: trying to help a failing business isn’t liable to earn you any brownie points as an attractive social asset to other businesses looking to court your investment, nor is Ford going to return the poor investment you made in BP because they’re friends with each other.

Whatever the explanation, it seems that the human willingness to succumb to sunk costs in the financial realm may well be a byproduct of an adaptive mechanism in the social domain being co-opted for a task it was not designed to solve. When that happens, you start seeing some weird behavior. The key to understanding that weirdness is to understand the original functionality.