If you happen to have memories of watching TV in the 90s, chances are you might remember the old advertisements they used to run for the Cinnamon Toast Crunch cereal. The general premise of the ads followed the same formula: “Person X is really good at seeing Y, but can they see why kids love the taste of Cinnamon Toast Crunch?”. Inevitably, the answer was always “no”, as adults are apparently so square that they couldn’t wrap their minds around the idea that children happen to like sugar. Difficult concept, I know. Now, obviously, adults aren’t nearly so clueless in reality. In fact, as you’re about to see, even adults who are really rather poor at seeing things can still “see”, so to speak, why men tend to find certain features in women attractive. 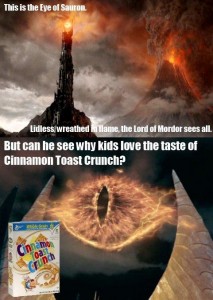 Sauron majored in sociology, so he guessed “cultural conditioning”

The first paper up for consideration is a 2010 piece by Karremans et al. The researchers begin by noting that men appear to demonstrate a preference for women with relatively-low waist-to-hip ratios (WHRs). Women with low WHRs tend to have figures that resemble the classic hourglass shape. Low WHRs are thought to be found attractive by men because they are cues to a woman’s fertility status: specifically, women with lower WHRs – around a 0.7 – tend to be more fertile than their more tubular-shaped peers. That said, this preference – just like any of our preferences – does not magically appear in our minds; every preference needs to develop over our lives, and development requires particular input conditions. If these developmental input conditions aren’t met, then the preference should not be expected to form. Simple enough. The question of interest, then, is what precisely these conditions are; what factors are responsible for men finding low WHRs attractive?

One ostensibly obvious condition for the development of a preference for low WHRs might be visual input. After all, if men couldn’t see women’s WHRs – and all those unrealistic expectations of female body type set by the nefarious media – it might seem awfully difficult to develop a taste for them. This poses something of an empirical hurdle to test, as most men have the ability to see, Thankfully for psychological research – though not so thankfully for the subjects of that research – some men, for whatever reasons, happen to have been born blind. If visual input was a key condition for the development of preferences for low WHRs in women, then these blind men should not be expected to show it. While large samples of congenitally blind men are not the easiest to come by, Karremans et al (2010) managed to recruit around 20 of them.

These blind men were presented with two female mannequins wearing tight-fitting dresses. One of these mannequins had a WHR of 0.7 – around what most people rate as the most attractive – and the other had a slightly-higher 0.84. The blind men were asked to feel and rate each mannequins on attractiveness from 1 to 10. Additionally, the researchers recruited about 40 sighted men to complete the task as well: 20 completing it while blindfolded and 20 without the blindfold. Of note is that all data collection was carried out in a van (read: “mobile laboratory room”) because sometimes psychological research is just fun like that. 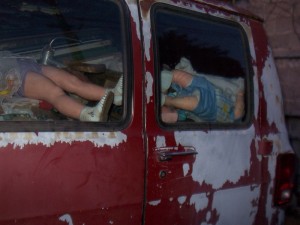 “How about coming into my van to feel my mannequins?”

The first set of results to consider come from the sighted men, who completed the task with the full use of their eyes: they gave the mannequin with the low WHR a rating of around an 8, whereas the mannequin with the higher WHR received only around a 6.5, as one might expect. In the blindfold condition, this difference was reduced somewhat (with ratings of 7.5 and around 7, respectively), suggesting that visual input might play some role in determining this preference. However, visual input was clearly not necessary: the blind men rated the low WHR mannequin at around a 7, but the high WHR mannequin at about a 6. In the words of the fine people over at Cinnamon Toast Crunch: “even blind men who can’t see much of anything can still see why men love the figures of women with low WHRs”.

Further evidence from earlier research points towards a similar conclusion (that these preferences are unlikely to be the result of portrayals of women in the media). A paper by Singh (1993) analyzed a trove of data on the female bodies that appeared in Playboy as centerfolds (from 1955-1965 and 1976-1990) and that won Miss America pageants (1923-1987). One might imagine that depictions of women in the media or found to be attractive might change somewhat over six decades if the type of women being portrayed were favored for some arbitrary set of reasons. Indeed, there was one noticeable trend: the centerfolds and pageant winners tended to be getting a little bit skinnier over that time period. Despite these changes in overall BMI, however, the WHR of the groups didn’t vary. Both grounds hovered around a consistent 0.7. Presumably, if blind men were consuming pornography, they would prefer the women depicted in Playboy just as much as non-blind men do. 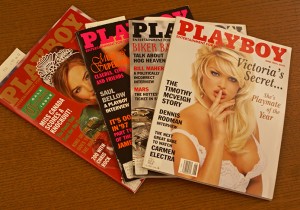 “We’ll be needing more “databases” for the mobile laboratory room…”

Given the correlation between WHR and fertility, this consistency in men’s preferences should be expected. That’s not to say, of course, that these preferences for low WHR aren’t modifiable. As I mentioned before, every preference needs to develop, and to the extent that certain modifications of that preference would be adaptive in different contexts, we should expect it to fluctuate accordingly. Now that matter of precisely what input conditions are responsible for the development of this preference remain shrouded: while visual inputs don’t seem to be necessary, the matter of which cues are – as well as why they are – are questions that have yet to be answered. For what it’s worth, I would recommend turning research away from the idea that the media is responsible for just about everything, but that’s just me.

7 comments on “In The World Of The Blind, The Woman With A Low WHR Is Queen”