When it comes to assessing hypotheses of evolutionary function, there is a troublesome pair of intuitions which frequently trip many people up. The first of these is commonly called the naturalistic fallacy, though it also goes by the name of an appeal to nature: the idea that because something is natural, it ought to be good. As a typical argument using this line might go, because having sex is natural, we ought to – morally and socially – approve of it. The corresponding intuition to this is known as the moralistic fallacy: if something is wrong, then it’s not natural (or, alternatively, if something is good, it is natural). An argument using this type of reasoning might (and has, more or less) gone, because rape is morally wrong, it cannot be a natural behavior. In both cases, ‘natural’ is a bit of a wiggle word but, in general, it seems to refer to whether or not a species possesses some biological tendency to engage in the behavior in question. Put another way, ‘natural’ refers to whether a species possesses an adaptation(s) that functions so as to bring about a particular outcome. Extending these examples a little further, we might come up with the arguments that, because humans possess cognitive mechanisms which motivate sexual behavior, sex must be a moral good; however, because rape is a moral wrong, the human must not contain any adaptations that were selected for because they promoted such behavior. 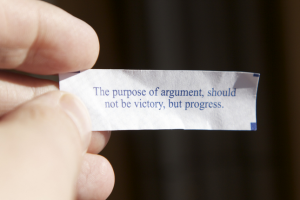 An argument with which many people appear to disagree, apparently

This type of thinking is, of course, fallacious, as per the namesakes of the two fallacies. It’s quite easy to think of many moral wrong which might increase one’s reproductive fitness (and thus select for adaptations that produce them), just as it is easy to think of morally-virtuous behaviors that could lower one’s fitness: infanticide is certainly among the things people would consider morally wrong, and yet there is often an adaptive logic to be found in the behavior; conversely, while the ideal of universal altruism is praised by many as morally virtuous, altruistic behavior is often limited to contexts in which it will later be reciprocated or channeled towards close kin. As such, it’s probably for the best to avoid tethering one’s system of moral approval to natural-ness, or vice versa; you end up in some weird places philosophically if you do. Now this type of thinking is not limited to any particular group of people: scientists and laypeople alike can make use of these naturalistic and moralistic intuitions (intentionally or not), leading to cases where hypotheses of function are violently rejected for even considering that certain condemned behaviors might be the result of an adaptation for generating them, or other cases where weak adaptive arguments are made in the service of making other behaviors with which the arguer approves seem more natural and, accordingly, more morally acceptable.

With that in mind, we can turn to the matter of bullying: aggression enacted by more powerful individuals against weaker ones, typically peaking in frequency during adolescence. Bullying is a candidate behavior that might fall prey to the former fallacies because, well, it tends to generate many consequences people find unpleasant: having their lunch money taken, being hit, being verbally mocked, having slanderous rumors about them being spread, or other such nastiness. As bullying generates such proximately negative consequences for its victims, I suspect that many people would balk at the prospect that bullying might reflect a class of natural, adaptive behaviors, resulting in the bully gaining greater access to resources and reputation; in other words, doing evolutionarily useful things. Now that’s not to say that if you were to start bullying people you would suddenly find your lot in life improving, largely because bullying others tends to carry consequences; many people will not sit idly by and suffer the costs of your bullying; they will defend themselves. In order for bullying to be effective, then, the bully needs to possess certain traits that minimize, withstand, or remove the consequences of this retaliation, such as a greater physical formidability than their victim, a stronger social circle willing to protect them, or other means of backing up their aggression.

Accordingly, only those in certain conditions and possessing particular traits are capable of effectively bullying others (inflicting costs without suffering them in turn). Provided that is the case, those who engaged in bullying behaviors more often might be expected to achieve correspondingly greater reproductive success, as the same traits that make bullying an effective strategy also make the bully an attractive mating prospect. It’s probably worse to select a mate unable to defend themselves from aggression, relative to one able and willing to do so; not only would your mate (and perhaps you) be exploited more regularly, but such traits may well be passed onto your children in turn, leaving them open for exploitation as well. Conversely, the bully able to exploit others can likely can access to more plentiful resources, protect you from exploitation, and pass such useful traits along to their children. That bullying might have an adaptive basis was the hypothesis examined in a recent paper by Volk et al (2015). As noted in their introduction, previous data on the subject is consistent with the possibility that bullies are actually in relatively better condition than their victims, with bullies displaying comparable or better mental and physical health, as well as improved social and leadership skills, setting the stage for the prospect of greater mating success (as all of those traits are valuable in the mating arena). Findings like those run counter to some others suggestions floating around the wider culture that people bully others precisely because they lack social skills, intelligence, or are unhappy with themselves. While I understand that no one is particularly keen to paint a flattering picture of people they don’t like and their motives for engaging in behavior they seek to condemn, it’s important to not lose sight of reality while you try reduce the behavior and condemn its perpetrators. 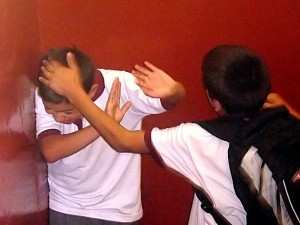 “Sure, he does hit me regularly, but he’s a really great guy otherwise”

Volk et al (2015) examined the mating success of bullies by correlating people’s self-reports of their bullying behavior with their reports of dating and sexual behavior across two samples: 334 younger adolescents (11-18 years old) and 143 college freshman, all drawn from Canada. Both groups answered questions concerning how often they engaged in, and were a victim of, bullying behaviors, whether they have had sex and, if they had, how many partners they’ve had, whether they have dated and, if so, how many people they’ve dated, as well as how likable and attractive they found themselves to be. Self-reports are obviously not the ideal measures of such things, but at times they can be the best available option.

Focusing on the bullying results, Volk et al (2015) reported a positive relationship between bullying and engaging in dating and sexual relationships in both samples: controlling for age, sex, reported victimization, attractiveness, and likability, bullying not only emerged a positive predictor as to whether the adolescent had dated or had sex at all (about 1.3 to 2 times more likely), but also correlated with the number of sexual and, sometimes, dating partners; those who bullied people more frequently tended to have a greater number of sexual partners, though this effect was modest (bs ranging from 0.2 to 0.26). By contrast, being a victim of bullying did not consistently or appreciably effect the number of sexual partners one had (while victimization was positively correlated with participant’s number of dating partners, it was not correlated with their number of sexual partners. This might reflecting the possibility that those who seek to date frequently might be viewed as competitors by other same-sex individuals and bullied in order to prevent such behavior from taking place, though that much is only speculation).

While this data is by no means conclusive, it does present the possibility that bullying is not indicative of someone who is poor shape physically, mentally, or socially; quite the opposite, in fact. Indeed, that is probably why bullying often appears to be so one-sided: those being victimized are not doing more to fight back because they are aware of how well that would turn out for them. Understanding this relationship between bullying and sexual success might prove rather important for anyone looking to reduce the prevalence of bullying. After all, if bullying is providing access to desirable social resources – including sexual partners – it will be hard to shift the cost/benefit analysis away from bullying being the more attractive option barring some introduction of more attractive alternatives for achieving that goal. If, for instance, bullying serves a cue that potential mates might use for assessing underlying characteristics that make the bully more attractive to others, finding new, less harmful ways of signaling those traits (and getting bullies to use those instead) could represent a viable anti-bully technique.

But, until then, this kid is going to get so laid

As these relationships are merely correlational, however, there are other ways of interpreting them. It could be possible, for example, that the relationship between bullying and sexual success is accounted for by those who bully being more coercive towards their sexual partners as well as their victims, achieving a greater number of sexual partners, but not in the healthiest fashion. This interpretation would be somewhat complicated by the lack of a sex differences between men and women in the current data, however, as it seems unlikely that women who bully are also more likely to coerce their male partners into sex they don’t really want. The only sex difference reported involved the relationship between bullying and dating, with the older sample of women who bullied people more often having a greater number of dating relationships (r = 0.5), relative to men (r = 0.13), as well as a difference in the younger sample with respect to desire for dating relationships (female r = 0.28, male r = 0.03). It is possible, then, that men and women might bully others, at least at times, to obtain different goals, which ought to be expected when the interests of each sex diverge. Understanding those adaptive goals should prove key for effectively reducing bullying; at least I feel that understanding would be more profitable than positing that bullies are mean because they wish to make others as miserable as they are, crave attention, or other such implausible evolutionary functions.