Back at the end of last month, Mark Van Vugt presented what he considered to be five candidate selection pressures which might explain how homosexuality as an orientation – the exlcusive preference for same-sex sexual partners – came to both (a) exist in human populations in the first place, and (b) have its existence was maintained in the face of, what appear to be, obvious reproductive disadvantages. In each of these five cases I find the arguments lacking for either theoretical or empirical reasons, and, in most cases, both. Before I get to the science, however, I would like to deal with a troubling claim that Mark makes at the beginning of his post:

“The converging findings suggest that exclusive homosexuality is not a “life style choice” but a perfectly natural sexual orientation….Although these findings make a reasonably strong claim that homosexuality is part of someone’s genotype, there is still much speculation as to how it got there.”

There are three problems I have with those two above statements (admittedly, juxtapositioned for effect) that are worth pointing out. The first is the language used: while I’m in no way about to tell you that being gay is a choice (I happen to think it isn’t one), I will point out that the opposite of “choice” is not “genetic” or “natural”. If it was discovered tomorrow that homosexuality was determined by some environmental variable, say, a specific pathogen affecting development, (Cochran, Ewald, & Cochran, 2000) that would make homosexuality no more or less of a “choice”. The second issue is that all biological traits are equally and entirely codetermined both by environmental and genetic factors. Accordingly, saying homosexuality (or any single other trait) is “part of someone’s genotype” is both trivially and true as well as potentially misleading for those who are not well-versed in genetics.

Finally, the third issue is a cautionary point I made about a year-and-a-half ago: presumably, all the talk about choice, genes, and “being natural” has little to do with statements of fact, but are rather about the moral status of homosexuality. While I fully support the moral acceptance of homosexuality, I would be very wary of basing that support on the notion that homosexuality is a “genetic” trait that people “don’t choose”. Not only do I think homosexuality should be accepted regardless of whether it’s a choice or caused by some environmental factor, but I further would hate to see the arguments for acceptance slip away on the basis of the concordance data not panning out (which we’ll see in a moment, it does not). 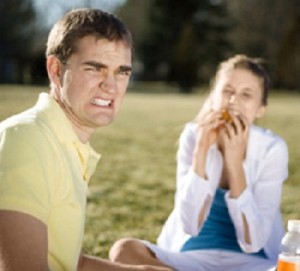 Politics and science make awkward bedfellows, not unlike gay men and women…

Now that the political-stuff is out of the way, we can start dealing with some of Mark’s claims. The first thing I’ll take issue with there is the prevalence data. The stable 8% figure that Mark mentions is one that exceeds most every published estimate of homosexuality I’ve seen; those have typically hovered about 1-3%. Bear in mind, one isn’t simply trying to estimate the percentage of people who have had a homosexual experience before; it’s preferences which are of primarily interest. Further, there is little reason to think that such a figure is stable, as Mark implies it is, across time, place, or history. It well might have been, but one would have an awful hard time demonstrating that it is if one wishes to go beyond pure assertion.

As for his next point, yes; there is indeed evidence that twins tend to share a sexual orientation, as they do many other things. However, the concordance rates for a homosexual orientation among identical twins (that is, given that one twin has a homosexual orientation, how often does their co-twin have a similar orientation)  is only about 30%, and about 8.3% for non-identical twin pairs (Kendler et al, 2000). To make matters even more complicated, it’s worth noting that these concordance rates only tells us that some amount of what these twins share – genes, prenatal, and postnatal environments – makes it more likely that both will eventually develop a homosexual orientation, but it doesn’t tell us what that something is. Twin pairs, for instance, are similarly concordant for patterns of infectious disease (Cochran, Ewald, & Cochran, 2000), but it doesn’t mean they inherent genes that function to make them sick.

Finally, before getting to the selection pressures, it’s also worth countering the claim that homosexuality is well-documented in non-human species. Sure, there are some species that will, occasionally, engage in brief interactions more typical of mixed-sex pairs, be those interactions sexual or non-sexual in nature. What needs to be explained when it comes to homosexuality is not homosexual behaviors, but rather heterosexual avoidance. This more-or-less exclusive sexual preference for same-sex conspecifics has only been documented in rams, to my knowledge, and in no other non-human species, much less many or most of them.

Selection Pressures: Kin Selection
The first of the five selection pressures that Mark mentions is kin selection: helping others who share your genes reproduce. As Mark correctly points out, there’s little evidence for his hypothesis being correct, but the issues are much larger than that. For starters, the relationship coefficients don’t work well here: for each offspring a homosexual individual doesn’t produce, they would need to ensure that a full sibling produced an additional two that they otherwise wouldn’t have had for them to just break even and for this hypothesis to work. This would require an intense level investment that, if it existed, would be plainly obvious to any observer. It’s not enough that a homosexual individual is occasionally or even often nice to their relatives; they would need to be utterly devoted around the clock.

More to the point, though, is the seemingly apparent point that having a same-sex sexual attraction does nothing to help you invest in kin. Sure, maybe an asexual preference would work, if you wanted to save the time otherwise spent pursuing sex; a facultative heterosexual preference would probably do just as well, if not better. A homosexual orientation, on the other hand, is a complete waste of time; it would be a pointless distraction from the investment issue. Unless seeking out same-sex sexual relations was somehow functional in terms of increasing investment (or a rather odd byproduct), this explanation makes little sense. 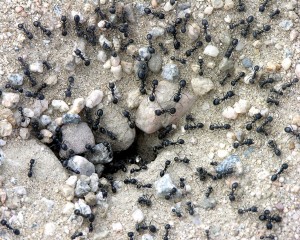 Ants are very helpful, yet not very gay…

Selection Pressures: Group Selection
Group selection – the idea that a trait can spread if it offers group-wide advantages despite being individually detrimental – is a conceptual nonstarter, running counter to everything we know about how evolution works. Since I’ve written about this matter before on several occasions, there’s little need to continue beating this theoretical horse which has been dead since the 1960s. As Mark, again, points out, he knows of no evidence in favor of this hypothesis either, so there’s little less to say about it, other than that it doesn’t sound like a very “big” idea.

Selection Pressures: Sexual Attraction
This one, I admit, is probably the strangest of the selection pressures Mark posits. The idea here seems to be that because women might find homosexual men sexually attractive, this could give homosexual men a reproductive advantage. Now, perhaps I’m misunderstanding the basic idea in some fundamental way, but if an individual with a homosexual preference is found to be attractive by opposite sex individuals, it would seem to not matter much, as it’s quite unlikely that the two will ever end up having sex at all, let alone frequently. Provided these increased opportunities for sexual encounters even exist(Mark says there’s no evidence available that they do), they wouldn’t seem to do much good if the urge to take them is all but absent.

In case the problems aren’t plainly apparent at this point, imagine a hypothetical species of bird, like a peacock. In this species, males grow elaborate ornaments that females find to be attractive, generally speaking. Growing these ornaments, however, carries a cost: it makes the males sterile. In this case, no matter how attractive a male is to the females, his genes will never be benefited because of it. Attractiveness only matters so much as it leads to reproduction. No reproduction, no selection.

Selection Pressures: Balanced Selection
This argument at least poits that homosexuality is reproductively detrimental. These detriments are made up elsewhere, though, in the form of benefits to other carries of the genes. In essence, this argument says homosexuality is a lot like sickle-cell: harmful in some cases, but beneficial in others. There’s nothing theoreticall wrong with this possibility, but there are some serious practical hurdles. Specifically, if homosexual orientations ensured that 1-8% of the population was, effectively, sterile, there would need to be tremendous compensating benefits. Sickle-cell, for instance, is only common in areas that have a ton of malaria – which can kill huge minorities of populations and leave even more severely harmed – and pretty much the only known byproduct of its kind with a fitness hit as great as homosexuality (Cochran, Ewald, & Cochran, 2000). It also doesn’t fit well with the concordance rate data. So, while this explanation is theoretically possible, it’s highly improbable. At the risk of sounding like a broken record, there’s also no known evidence for this being the case.

Selection Pressures: Sexually Antagonistic Selection
This brings us to the final selection pressure. Here, the idea is that a gene is detrimental when it’s inherited by one sex, but beneficial in the other. This is another theoretically plausible suggestions with some consistent evidence behind it (but the account isn’t anywhere near complete, and only considers male homosexuality). Unfortunately for this suggestion, like the above hypothesis, it also suffers from the concordance rate data. It would also require that females consistently more than make up for the detriment to the male offspring, reproductively. Remember, this isn’t just a matter of slight disadvantages; this is a matter of effective sterility. Further, such sexually antagonistic issues tend to be weeded out over time, as any new modifications that can avoid the costs associated with expression in males will be selected for. Even if this was a viable account, then, it would still be far from a complete one, as it would not be able to explain why some of the twin pairs turn out concordant, but most don’t, why these reproductive costs have yet to be eliminated, and it’s missing an account of female homosexuality. 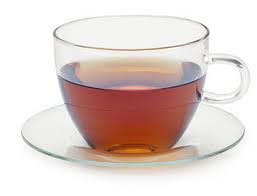 “Would you care for a sixth cup of weak tea?”

Out of the five “big” ideas, then, four seem to be basically dead in the water and the fifth, while potentially plausible, is by no means conclusive or complete. In my experience, poor outcomes like these can be seen frequently when people attempt to use scientific research to justify some political or moral opinion: any available evidence that can be potentially interpreted in a favorable light is seized upon, no matter how weak or nonsensical the underlying connection between the two is. The goal, after all, doesn’t appear to be accuracy, but rather persuasion; to the extent that the former helps with the latter, all the better for the persuader, but their need not be any necessary connection between the two goals.

15 comments on “5 Weak Ideas About The Origin Of Homosexuality: A Reply”