People frequently complain that Disney movies gave them unrealistic expectations about love and relationships. While superficially it might sound plausible – after all, the relationships are portrayed as being a perpetual state of martial bliss and we do love to blame the media for things – it leaves one big question looming: why didn’t Disney movies give people unrealistic expectations about animals, or inanimate objects, talking and breaking into dance and song? Surely, the two themes are approximately as common in the films, yet only one seems to cause a stir. I’m not sure if we’re supposed to conclude that people are, on the one hand, perfectly capable of distinguishing fantasy from reality, and, on the other, far less able to separate fantasy from reality, contingent on the topic. “Of course animals don’t talk, that’s just silly, but love really is supposed to go on happily ever after, because that’s romantic.”

I bring that question up because, in two articles I’ve come across lately, some people are complaining about how impractical and sexist female costumes can be in a fantasy world where they already accept that people can fly, have superhuman strength, and can have a secret identity simply by changing clothes and putting on glasses (among other things, and that’s just one guy). 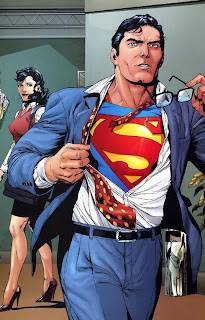 You want impractical? According to that picture, Superman seems to tuck his cape into the back of his pants.

Both articles above seem to equate sexualization with sexism, though precisely why that link is supposed to exist is left unexplained. It’s almost as if their implicit proposition is that either (a) women can be sexually attractive, dressing and/or acting provocatively, or (b) be valuable and respected, but not both. While that’s an interesting thought to tackle in its own right, it’s not the main thrust of what I’m going after here. Both of the articles make another suggestion that I’d like to examine a little more closely, and it’s this: the male characters in these games and comics are not sexualized, (or at least not as sexualized) while the female ones are. The natural question to be asking at this point is this: what does it mean for a man or a woman to be sexualized?

The authors are quick to suggest what it means for a woman to be sexualized: so long as she’s attractive and wearing revealing clothing, that’s about it. The primary focus of both articles is on the revealing amounts and styles of clothing that women are wearing, compared to the men. I’m not going to say that these female characters aren’t being depicted in a sexually attractive way; they obviously are. However, what neither article touches on is what it means for a man to be sexualized, which you’d think would be important when making the claim that men aren’t being sexualized. Granted, the percentage of body that’s being covered by an average costume is higher for the men than for the women, but is that really all there is to it? As a go-to solution for making a character more sexually appealing, simply showing more skin won’t work as well for both genders. What serves to sexualize a woman does not always have the same effect for a man. If you threw Batman into a belly shirt and short-shorts, that wouldn’t make his character more sexually appealing by virtue of the fact that you get a better look at the skin of his rippling abs and toned legs. 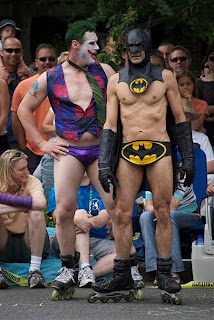 I don’t know how those two are going to fit in time to fight each other with all those women they’d have to fight off.

I would add that most male heroes are depicted in outfits so skin-tight they might as well have been painted onto their bodies; bodies which are so profoundly sculpted and muscled they give mine a run for its money. Sure, the female characters wear less than the men tend to, but in terms of showing off their hyper-fit forms it doesn’t tend to matter that much. I would add that pretty much every hero, man or woman, is depicted as ludicrously symmetrical with near flawless skin. At this point, we can all take a minute to allow the critics to think, “not all women find symmetrical faces, unblemished skin, and muscular bodies sexually appealing, so therefore these male figures aren’t being sexualized physically”.

Looks are only one side of the issue, though; actions are another. These male heroes are also depicted as, generally, being rather selfless, fighting to protect the innocent and the vulnerable at great personal risk for extended periods of time. On top of that, they almost universally win their fights, demonstrating their inability to be dominated by rivals. They are often highly loved, respected, or feared by the population, all potential signals of bearing high social status and power. Several of them are exceedingly rich, others are exceeding intelligent, and some are both. It’s rare to find one that’s short. They often have many other powerful friends and allies. As we all know, these are characteristics that are notoriously sexually unappealing to women. By “unappealing”, I of course mean that these characteristics are actually extremely appealing to most women (Buss, 1994).

One of the articles points out that the kinds of women being depicted are a male fantasy and being the kind of person a hero is depicted to be is also a male fantasy. I’d say that statement is fairly accurate, but it overlooks a key point: the only reason a man would fantasize about being that kind of a guy in the first place is because that kind of guy is attractive to women. Men fantasize about being all sorts of people, but what almost none of them fantasize about is being perceived as sexually unattractive or having sexually unattractive partners. Being super-muscular, attractive, and fighting imposing villains is only a means to that end of fulfilling women’s sexual desires. 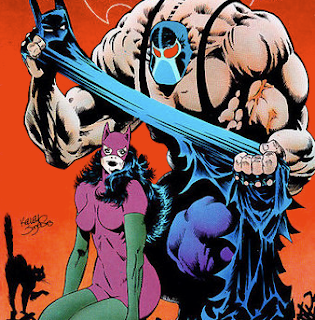 “Tell me more about how women are portrayed in an unrealistic manner. I’m all ears, minus that 95% of me made of muscles where my neck should be.”

What is interesting about the issue surrounding the women’s costumes is the same interesting bit about the Disney example: of all the distortions of reality that could be complained about, (and in the world of superheroes there are many) why does this issue in particular get singled out as being the unrealistic and problematic one? It seems to speak more to the psychology and motives of those who are doing the complaining than anything else, I feel. The sexualization of men in these comics is rarely even noticed, or is casually dismissed as unimportant if it is; both articles flat out say that to even suggest men are sexualized alongside the women in these comics is ludicrous. The men are wearing more clothes, therefore they must not be being sexualized. QED.

It seems plausible that the sexualization of men is simply paid little mind because the sexualization of women is seen as either more demeaning or more threatening. The underlying assumption of both writers seems to be that if a woman is to be taken seriously, she needs to dress more modestly and avoid acting in sexually provocative ways. They might not come out and say it directly, but that seems to be the angle they’re approaching this issue from. Why people might care about the sexual proclivities and attractiveness of others – even fictional characters -  will be explored in more detail next post.