In the course of proposing new research and getting input from others, I have had multiple researchers raise the same basic concern to me: the project I’m proposing might be unlikely to eventually get published because, given that I find the results I predict that I will, reviewers might feel the results are not interesting or attention-grabbing enough. While I don’t doubt that the concern is, to some degree, legitimate*, it has me wondering about whether their exists an effect that is essentially the reverse of that issue. That is, how often does bad research get published simply on the grounds that it appears to be interesting, and are reviewers willing to overlook some or all the flaws of a research project because it is, in a word, cute? 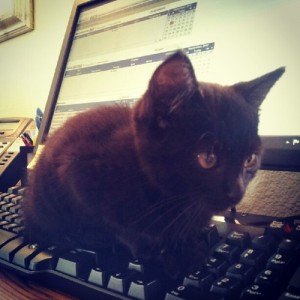 Which is why I always make sure my kitten is an author on all my papers.

The cute experiment of the day is Simons & Levin (1998). If you would like to see a firsthand example of the phenomenon this experiment is looking at before I start discussing it, I’d recommend this video of the color changing card trick. For those of you who just want to skip right to the ending, or have already seen the video, the Simons & Levin (1998) paper sought to examine “change blindness”: the frequent inability of people to detect changes in their visual field from one moment to the next. While the color changing card trick only replaced the colors of people’s shirts, tablecloths, or backdrops, the experiment conducted by Simons & Levin (1998) replaced actual people in the middle of a conversation to see if anyone would notice.The premise of this study would appear to be interesting on the grounds that many people might assume that they would notice something like the fact that they were suddenly talking to a different person then they were a moment prior, and the results of this study would seem to suggest otherwise. Sure sounds interesting when you phrase it like that.

So how did the researchers manage to pull off this stunt? The experiment began when a confederate holding a map approached a subject on campus. After approximately 10 or 15 seconds of talking, two men holding a door would pass in between the confederate and the subject. Behind this door was a second confederate who changed places with the first. The second confederate would, in turn, carry on the conversation as if nothing had happened. Of the 15 subjects approached in such a manner, only 7 reported noticing the change of confederate in the following interview. The authors mention that out of the 7 subjects that did notice the change, there seemed to be a bias in age: specifically, the subjects in the 20-30 age range (which was similar to that of the confederates) seemed to notice the change, whereas the older subjects (in the 35-65 range) did not. To explain this effect, Simons & Levin (1998) suggested that younger subjects might have been treating the confederates as their “in-group” because of their age (and accordingly paying more attention to their individual features) whereas the older subjects were treating the confederates as their “out-group”, also because of their age (and accordingly paying less attention to their features).

In order to ostensibly test their explanation, the authors ran a follow-up study. This time the same two confederates were dressed as construction workers (i.e. they wore slightly different construction hats, different outfits, and different tool belts) in order to make them appear as more of an “out-group” member to the younger subjects. The confederates then exclusively approached people in the younger age group. Lo and behold, when the door trick was pulled, this time only 4 of the 12 subjects caught on. So here we have a cute study with a counter-intuitive set of results and possible implications for all sorts of terms that end in -ism. 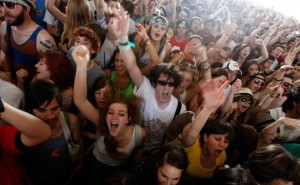 And the psychology community goes wild!

It seems to have gone unnoticed, however, that the interpretation of the study wasn’t particularly good. The first issue, though perhaps the smallest, is the sample size. Since these studies only ran a total of 13.5 subjects each, on average, the extent to which this difference in change blindness (approximately 15%) across groups is just due to chance is unknown. Let’s say, however, that we give the results the benefit of the doubt and assume that they would remain stable if sample size was scaled up. Even given that consideration, there are still some very serious problems remaining.

The larger problem is that the authors did not actually test their explanation. This issue comes in two parts. First, Simons and Levin (1998) proposed that subjects were using cues of group membership in determining whether or not to pay attention to an individual’s features. In their first study, this cue was assumed to be age; in the second study, this cue was assumed to now be construction worker. Of note, however, is that the same two confederates took part in both experiments, and I doubt their age changed much between the two trials. This means that if Simons and Levin (1998) were right, age only served as an indicator of group membership in first context; in the second, that cue was overridden by another – construction worker. Why that might be the case is left completely untouched by the authors, and that seems like a major oversight. The second part is that the authors didn’t test whether the assumed “in-group” would be less change blind. In order to do that they would have had to, presumably, pull the same door trick using construction workers as their subjects. Since Simons and Levin (1998) only tested an assumed out-group, they are unable to make a solid case for differences in group membership being responsible for the effect they’re talking about.

Finally, the authors seem to just assume that the subjects were paying attention in the first place. Without that assumption these results are not as counter-intuitive as they might initially seem, just as people might not be terribly impressed by a magician who insisted everyone just turned around while he did his tricks. The subjects had only known the confederates for a matter of seconds before the change took place, and during those seconds they were also focused on another task: giving directions. Further, the confederate (who is still a complete stranger at this point) is swapped out for another very similar one (both are male, both are approximately the same age, race, and height, as well as being dressed very similarly). If the same door trick was pulled with a male and female confederate, or a friend and a stranger, or people of different races, or people of different ages, and so on, one would predict you’d see much less change blindness. 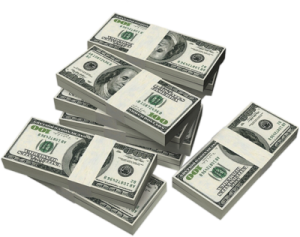 The real interesting questions would then seem to be what cues to people attend to, why do they attend to them, and in what order are they attended to? None of these questions are really dealt with by the paper. If the results they present are to be taken at face value, we can say the important variables are often not the color of one’s shirt, the sound of one’s voice (within reason), very slight differences in height, and modestly different hairstyles (when one isn’t wearing a hat) when dealing with complete strangers of similar gender and age, while also involved in another task.

So maybe that’s not a terribly surprising result, when phrased in such a manner. Perhaps the surprising part might even be that so many people noticed the apparently not so obvious change. Returning to the initial point, however, I don’t think many researchers would say that an experiment designed to demonstrate that people aren’t always paying attention to and remembering every single facet of their environment would be a publishable paper. Make it cute enough, however, and it can become a classic.

*Note: whether the concerns are legitimate or not, I’m going to do the project anyway.

4 comments on “The Salience Of Cute Experiments”