Gamers are no strangers to the anger that can accompany competition. As a timely for-instance, before I sat down to start writing this post I was playing my usual online game to relax after work. As I began playing my first game of the afternoon, I saw a message pop up from someone who had sent me a friend request a few days back after I had won a match (you need to accept these friend requests before messages can be sent). Despite the lag in between the time that request was sent and when I accepted it, the message I was greeted with called me a cunt and informed me that I have no life before the person removed themselves from my friend list to avoid any kind of response. However accurately they may have described me, that is the most typical reason friend requests get sent in that game: to insult. Many people – myself included – usually don’t accept them from strangers for that reason and, if you do, it is advisable to wait a few days for the sender to cool off a bit and hopefully forget they added you. Even then, that’s no guarantee of a friendly response.

Now my game happens to be more of a single-player experience. In team-based player vs player games, communication between strangers can be vital for winning, meaning there is usually less of a buffer between players and the nasty comments of their teammates. This might not draw much social attention, but these players being insulted are sometimes women, bringing us nicely to some research on sexism.

A 2015 paper by Kasumovic & Kuznekoff examined how players in the online, first-person shooter game Halo 3 responded to the presence of a male and female voice in the team voice chat, specifically in terms of both positive and negative comments directed at them. What drew me to this paper is two-fold: first, I’m a gamer myself but, more importantly, the authors also constructed their hypotheses based on evolutionary theory, which is unusual for papers on sexism. The heart of the paper revolves around the following idea: common theories of sexist behavior towards women suggest that men behave aggressively towards them to try and remove them from male-dominated arenas. Women get nasty comments because men want them gone from male spaces. The researchers in this case took a different perspective, predicting instead that male performance within the game would be a key variable in understanding the responses players have.

As men heavily rely on their social status for access to mating opportunities, the authors predicted they should be expected to respond more aggressively to newcomers into a status hierarchy that displace them. Put into practice, this means that a low-performing male should be threatened by the entry of a higher-performing woman into their game as it pushes them down the status hierarchy, resulting in aggression directed at the newcomers. By contrast, males that perform better should be less concerned by women in the game, as it does not undercut their status. Instead of being aggressive, then, higher-performing men might give female players more positive comments in the interests of attracting them as possible mates. Putting that together, we end up with the predictions that women should receive more negative comments than men from men who are performing worse, while women should receive more positive comments from men who are performing better.

To test this idea, the researchers played the game with 7 other random players (two teams of 4 players) while playing either male or female voice lines at various intervals during the game (all of which were pretty neutral-to-positive in terms of content, such as, “I like this map” played at the beginning of a game). The recordings of what the other players (who did not know they were being monitored in this way, making their behavior more natural) said were then transcribed and coded for whether they were saying something positive, negative, or neutral directed at the experimenter playing the game. The coders also checked to see whether the comments contained hostile sexist language to look for something specifically anti-woman, rather than just negativity or anger in general.

Across 163 games, any other players spoke at all in 102 of them. In those 102 games, 189 players spoke in total, 100% of whom were male. This suggests that Halo 3, unsurprisingly, is a game that women aren’t playing as much as men. Only those players who said something and were on the experimenter’s team (147 of them) were maintained for analysis. About 57% of those comments were in the female-voiced condition, while 44% where in the male condition. In general, then, the presence of a female voice led to more comments from other male players.

Finally, only a few players (13%) made sexist statements, so the results couldn’t be analyzed particularly well. Statistically, these comments were unrelated to any performance metrics. Not much more to say about that beyond small sample size. 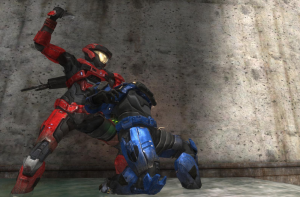 Team red is much more supportive of women in gaming

While there are a number of details and statements within the paper I could nitpick, I suspect that Kasumovic & Kuznekoff (2015) are on the right track with their thinking. I would add some additional points, though. The first of these is rather core to their hypothesis: if men are threatened by status losses brought on by their relative poor performance, it seems that these threats should occur regardless of the sex of the person they’re playing with: whether a man performs poorly relative to a woman or another man, he will still be losing relative status. So why is there less negativity directed at men (sometimes), relative to women? The authors mention one possibility that I wish they had expanded upon more, which is that men might be responding not to the women per se as much as the pitch of the speaker’s voice. As the authors write, voice pitch tends to correlate with dominance, such that deeper voices tend to correlate with increased dominance.

What I wish they had added more explicitly is that aggression should not be deployed indiscriminately. Being aggressive towards people who are liable to beat you in a physical contest isn’t a brilliant strategy. Since men tend to be stronger than women, behaving aggressively towards other men – especially those outperforming you – should be expected to have carried different sets of immediate consequences, historically-speaking (though there aren’t many costs in modern online environments, which is why people behave more aggressively there than in person). It might not be that the men are any less upset about losing when other men are on their team, but that they might not be equally aggressive (in all cases) to them due to potential physical retribution (again, historically).

There are other points I would consider beyond that. The first of these is the nature of insults in general. If you remember the interaction I had with an angry opponent initially, you should remember that the goal of their message was to insult me. They were trying to make me feel bad or in some way drag me down. If you want to make someone feel bad, you would do well to focus on their flaws and things about them which make you look better by comparison. In that respect, insulting someone by calling attention to something you share in common, like your gender, is a very weak insult. On those grounds we might expect more gendered insults against women, given that men are by far the majority in these games. Now because lots of hostile sexist insults weren’t observed in the present work, the point might not be terribly applicable here. It does, however, bring me to my next point: you don’t insult people by bringing attention to things that reflect positively on them. 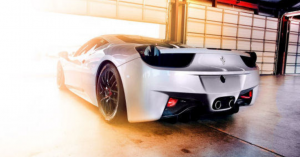 “Ha! That loser can only afford cars much more expensive than I can!”

As women do not play games like Halo nearly as much as men, that corresponds to lower skill in those games on a population level. Not because women are inherently worse at the game but simply because they don’t practice them as much (and people who play those games more tend to become better at them). If you look at the top competitive performance in competitive online games, you’ll notice the rosters are largely, if not exclusively, male (not unlike all the people who spoke in the current paper). Regardless of the causes of that sex difference in performance, the difference exists all the same.

If you knew nothing else about a person beyond their gender, you would predict that a man would perform better at Halo than a woman (at least if you wanted your predictions to be accurate). As such, if you’ve just under-performed at this game and are feeling pretty angry about it, some players might be looking to direct blame at their teammates who clearly caused the issue (as it would never be their the speaker’s skill in the game, of course. At least not if you’re talking about the people yelling at strangers).

If you wanted to find out who was to blame, you might consult the match scores: factors like kills and deaths. But those aren’t perfect representations of player skill (that nebulous variable which is hard to get at) and they aren’t the only thing you might consult. After all, scores in a singular game are not necessarily indicative of what would happen over a larger number of games. Because of that, the players on these teams still have limited information about the relative skill of their teammates. Given this lack of information, some people may fall back on generally-accurate stereotypes in trying to find a plausible scapegoat for their loss, assigning relatively more blame for the loss to the people who might be expected to be more responsible for it. The result? More blame assigned to women, at least initially, given the population-level knowledge. 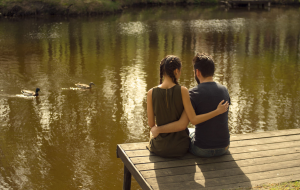 “I wouldn’t blame you if I knew you better, so how about we get to know each other over coffee?”

That’s where the final point I would add also comes in. If women perform worse on a population level than men, the low-performing men suffer something of a double status hit when they are outperformed by a woman: not only is there another player who is doing better than them, but one might expect this player to be doing worse, knowing only their gender. As such, being outperformed by such a player makes it more difficult to blame external causes for the outcome. In a sentence, being beaten by someone who isn’t expected to perform well is a more honest signal of poor skill. The result, then, is more anger: either in an attempt to persuade others that they’re better than they actually performed or in an attempt to get the people out of there who are making them look even worse. This would fit within the author’s initial hypothesis as well, and would probably have been worth mentioning.