...[T]he evidence strongly suggests that war is not a primordial instinct that we share with chimpanzees but a cultural innovation, a virulent meme that began spreading around the world about 10,000 years ago and still infects us. – John Horgan

What a hopeful thought: humans have no innate predisposition for coalitional violence – the large scale version of which we would call war. No. Violence, you see, is a meme; it’s an infection; part of this mysterious “culture” thing, which is not to be conflated in any way with biology. Apparently, it’s also a meme that humans were capable of spreading to chimps, via the introduction of bananas to make naturalistic observations easier. Who knew that fruit came with, basically, a meme of the plot to 28 Days Later? 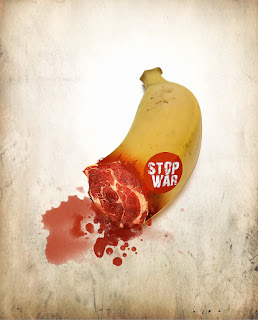 Bananas: the ultimate catalyst of war?

While this notion of “violence as a meme/infection, not anything innate” may sound hopeful to those who wish to see an end to violence, the babies that they are, it’s also an incredibly dim view. For starters, you know those big canine teeth chimps have? They don’t have them for eating. Rather than being utensils, they’re the biological equivalent of having four mouth-daggers, used mainly to, you guessed it, seriously injure or kill other conspecifics (Alba et al., 2001). Given that for the vast majority of chimpanzee evolution there haven’t been humans consistently handing out bananas – in turn prompting memes for fighting that lead to the evolution of large canine teeth – we can rightly conclude that the origins of coalitional violence go back a bit further than Horgan’s hypothesis would predict.

However, perhaps handing out concentrated resources, in form of bananas, did actually increase violence in some chimp groups (as opposed to allowing researchers to simply observe more of it). This brings us to a question that gets at part of the reason memetics runs into serious problems explaining anything, and why Horgan’s view of innateness seems lacking: why would handing out food increase violence in chimps over any other behavior, such as cooperation or masturbation? Once researchers provided additional food, that meant there were more resources available to be shared, or additional leisure time available, leading idle hands to drift to the genitals. So to rephrase the question in terms of memes: why would we expect additional resources to successfully further the reproduction of (or even create) memes for violence specifically, when they could have had any number of other effects? 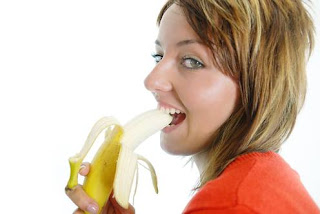 Before going any further, it would be helpful to clarify what is meant by the term “meme”. I’ll defer to Atran’s (2002) use of the term: “Memes are hypothetical cultural units, an idea or practice, passed on by imiation. Although nonbiological, they undergo Darwinian selection, like genes. Cultures and religions are supposedly coalitions of memes seeking to maximize their own fitness, regardless of the fitness costs for their human hosts”. As a thought experiment for understanding how evolution could work in a non-biological setting, the term works alright; when the idea runs up against reality, there are a lot of issues. I’d like to focus on what I feel is one of the biggest issues: the inability of meme theory to differentiate between the structure of the mind and the structure of the meme.

Memes aren’t supposed to reproduce and spread randomly. For starters, they’re generally species-specific: if you put a songbird in the same room as cat, provided the bird doesn’t end up dead, the “meme” of birdsong will never transfer to the cat no matter how much singing the bird does. You can show chimpanzees pictures of LOLcats their entire life, and I don’t think you’ll ever get so much as a chuckle from the apes, much less any imitation. Even within species, the spread of memes is not random. Let’s say I read something profoundly stupid about evolutionary psychology and, out of frustration, slam my head onto the keyboard to momentarily distract myself from the pain. The head-slam will generate a string of text, but that text won’t inspire people to replicate it and pass it along. What makes that bit of text less likely to be passed around then a phrase like, “Tonight. You”? 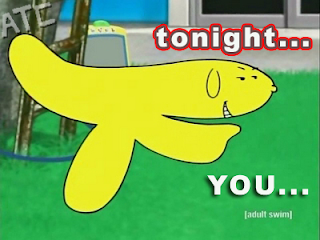 Sometimes, bananas get tired of waiting for idle hands.

An obvious candidate answer would be that one phrase appeals to our particular psychology in some way, whereas the other doesn’t. This tells us that both within- and between-species, what information gets passed on is going to be highly dependent on the existing structure of the mind; specifically, what kind of information the existing modules are already sensitive towards. To explain why a meme for violence – specifically violence – spreads throughout a population, you’d need to reference an organism already prepared for violence. Memes don’t create violence in a mind not already prepared for violence in certain situations; some degree of violence would need to be innate. Similarly, viruses don’t create the ability of host cells to reproduce them; they use the preexisting machinery for that job. In the same fashion, you’d need to reference an organism already prepared for birdsong to explain why such a meme would catch on in birds, but not cats or chimps.

I’m reminded of a story that’s generally used to argue against the notion of the universe, or our planet, being “fine-tuned” for life, but I think it works well to torpedo Horgan’s suggestion further. It goes something like this:

One day, a puddle awoke after a rainstorm. The puddle thought to itself, “Well, isn’t this interesting? The hole I find myself laying in seems remarkably well-suited to me; in fact, the hole seems to fit my shape rather perfectly. It seems incredibly improbable that I would end up in a hole that just happens to fit me, of all the possible places I could have ended up. Therefore, I can only conclude the hole was designed to have me in it”.

The shape of the water, obviously, is determined by the shape of its container – the hole. Likewise, the shape that information takes in a mind is determined by the shape of that mind – its modules, that all perceive, process, manipulate, and create information in their own fashion, rather than simply reproduce a high-fidelity copy (Atran, 2002). If you take away the container (the mind) you’ll quickly discover that the water (memes) have no shape of their own, and that a random string of words is as good of a meme as any.

A good example of both a meme, and the depth of thought displayed by puddles.

Further, I don’t see the concept of a meme adding anything above and beyond what predictions can already be drawn from the concept of a modular mind, nor do I think you can derive already existing states of affairs from meme theory. If the human mind has evolved to respond violently towards certain situations, contingent on context, we’re in a stronger position to predict when and why violence will occur than if we just say, “there’s a meme for violence”. As far as I can tell, the latter proposition makes few to no specific predictions, harking back to the illusion of explanatory depth. (“Norms, I’d like you to meet Memes. No one can seem to figure out much about either of you, so I’m sure you two can bond over that.”)

Though I have yet to hear any novel or useful predictions drawn from meme theory, I have heard plenty of smug comments along the lines of, “religion is just harmful meme, parasitizing your weak mind (and mine is strong enough to resist)”, or the initial quote. Until I hear something useful coming from the field of memetics, it’s probably best to pull back on the non-explanations passed off as worthwhile ones.