I’m not a parent, but I can only imagine being one is a largely horrible affair for all parties involved. While I am currently a fantastically successful and good-looking man, I also represent a multiple-decade old ball of need and demands that has more than likely ruined many years of life for my parents. So, my bad there, I suppose; that one’s on me. Out of the many reasons that I’ve been able to gather as to why being a parent is generally a pain in the ass, one is that children are notoriously finicky eaters. Frustrated with their children’s lack of desire to eat this or that, one line that many parents will resort to is, in one form or another, “Finish what’s on your plate. You’re lucky to even have food; there are people starving in the world who wish they were you right now.” I’m sure those hungry kids of the world can take some solace in knowing that the food wasn’t wasted; it was forced on an unwilling recipient. Much better.

Any child worth their salt, when faced with such an argument from their parents, would respond along the following lines: “It doesn’t matter whether I eat the food or throw it away; either way, it won’t have any impact on the starving children”. They’d be right. 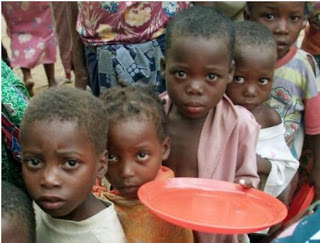 “Well, so long as you made them eat all that extra food they didn’t want….”

I’ve been speculating lately about what examples like this one can tell us about the functioning of our moral psychology. Here’s another: Tom Cruise and Katie Holmes had been reported to be spending about $130,000 on their daughter’s Christmas presents. The comments section of the article reveals that many people seem to find such behavior downright morally disgusting, if not outright evil, complete with lots of pictures of thoroughly malnourished children. Not only do Cruise and Holmes get painted as awful people for not using that money for other purposes, there is also rampant speculation as to how their child is going to turn out in the future because of it. Few of the predictions appear optimistic, while most speculate that she’s going to turn into an awful person. Why does the story take on that tone, rather than one of, say, parental affection, or of demonstrating value in personal freedom to spend money however one sees fit? You know, individual rights, and all that.

These examples make a very important point: if you’re trying to convince someone to do something – anything, it doesn’t matter what – it helps to have a victim on your side of the debate; someone who is being harmed by the action in question. Having one or more victims allows you to attempt and appeal to the moral psychology of others; it allows you to gain the support of latent coalitions in your social environment that can help achieve your ends. However, the term “victim” – much like the terms fairness or race – has a great deal of ambiguity to it. Victimhood is not an “out-there” type of variable capable of being easily measured or observed, like height or eye color. Victimhood is something that needs to be inferred. What cues people pick up on or make use of when assessing and generating such claims has gone largely unexamined.

Consider the victims that people outlined in the Tom and Katie example: first, they are hurting their daughter directly by spoiling her, as she will be unhappy in some way later in life because of it. Perhaps she won’t value what she has very much because it comes easily. By extension, they’re also hurting indirectly the people their daughter will come into contact with later in life, as she will turn out to be a nasty, entitled ass because of the treatment she received from her parents. Finally, Tom and Katie are hurting the starving children of world by choosing to spend some of their money in ways that aren’t immediately alleviating their plight; they are hurting these children by not helping them. The issue comes to be viewed as their responsibility in some way because of their status and wealth, as if they are expected to do something about it. By acting as they are, they are shirking some perceived social debts they have to others, like not repaying a loan.

Maybe he saved some lives by stopping that horrible new virus in MI-2, but he could have saved more lives by fighting hunger in Africa.

As the initial example of the finicky child demonstrates, victimhood connections are also open to be questioned and dismissed. By spending money on their daughter, Tom and Katie do not intend to do any harm; quite the opposite. Perhaps their daughter may grow up to love her own children deeply. After all, they’re trying to make their daughter happy, which most people wouldn’t class as a particularly heinous act. Any argument that applies to their lavish spending would apply with equal force to any non-vital spending. Almost all people in first world countries are capable of lowering their own standard of living and comfort to save at least one starving child from death. The Christmas spending itself is also benefiting others: the businesses being patronized, the employees of those businesses, the families of those employees, generating taxes for the government, and so on. Further, Tom and Katie are not, to the best of my knowledge, the cause of world hunger or the force maintaining it. I imagine you would be offended were you approached by a homeless man who insisted his being homeless was your responsibility and you owe him help to make up for your lavish lifestyle.

What all this demonstrates is that, in the service of promoting their views, people appear highly motivated to find victims. These victims might come from across the globe or live next door; they might live in the present, the future, or even the past; they might be victims in ways that in no way relate to the current situation; they might be victims without a face, like “society”. In fact, the victims may be the very people someone is trying to help. In the service of denying accusations of immorality, people are also highly motivated to deny victims. The shooting of Trayvon Martin was recently, in part, blamed on how he was dressed; because he was wearing a hoodie. A similar phenomena is seen when people suggest women who get raped were in part responsible for the act due to a proactive style of dress. Those who are seen as causing their own misfortunes are rarely given much sympathy.

This back and forth, between naming victims, assessing victimhood, and denying it, opens the way to what I feel are some sophisticated strategies on the parts of agents, patients, and third-parties. There’s a very valuable resource under contention – the latent coalitions of the social world, and their capacity for punishment – and successfully harnessing that resource depends on manipulating the fuzzy perceptions of harm and responsibility. It should go without saying that a victim also needs a victimizer, and you can bet people can be just as motivated to perceive victimizers in similar fashions. Was that man biting his thumb at you, sir, or was he just biting his thumb? Will he bite his thumb at you in the future if you don’t act to stop him now? 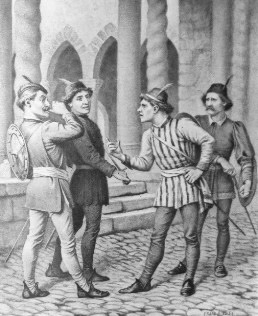 The 16th century equivalent of “suck it”.

As the social world we live in is a dynamic place, people must be prepared to assess these claims when made by others, defend against the claims when leveled against themselves, and generate and level these claims against others. As contexts change, we should be able to observe certain biases in information processing become more active or dormant within subjects. The same person who claims that Tom Cruise is a horrible person for spoiling his daughter will happily justify buying their own child a new iPad for Christmas. The child who asks for a new iPad but doesn’t get it will complain vocally about how they’re being mistreated, while third-parties judge these victimhood claims as lacking before going off to complain about how they’re unappreciated at work by their asshole boss.

What makes a victim a better victim? What about a perpetrator? What are the costs and benefits to being seen as one or the other, and how does that interact with other factors, such as gender? How do these expectations of who ought to do what get formed? How do relationships and group affiliations play into the generation and assessment of these perceptions? There are many such questions currently lacking an answer.

Like a water to fish or air to humans, our abilities in this realm often go unnoticed or unappreciated, despite our being constantly surrounded by them. While we many notice the inconsistencies and hypocrisies of others as their place in the social world changes, we rarely, if ever, notice them in ourselves. Noticing these habits in yourself would do you few favors if your goal is to persuade others. Besides, biases are those things that other people have. They lack your awesome powers of insight and understanding. Who are they to question your perceptions of the social world?