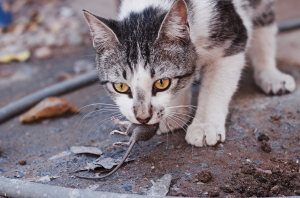 “I just do it for the old fashioned love of killing”

Having had many pet cats, I understand what effective predators they can be. The number of dead mice and birds they have returned over the years is certainly substantial, and the number they didn’t bring back is probably much higher. If you happen to be a mouse living in an area with lots of cats, your life is probably pretty stressful. You’re going to be facing a substantial adaptive challenge when it comes to avoiding detection by these predators and escaping them if you fail at that. As such, you might expect mice developed a number of anti-predator strategies (especially since cats aren’t the only thing they’re trying to not get killed by): they might freeze when they detect a cat to avoid being spotted; they might develop a more chronic state of psychological anxiety, as being prepared to fight or run at a moment’s notice is important when your life is often on the line. They might also develop auditory or visual hallucinations that provide them with an incorrect view of the world because…well, I actually can’t think of a good reason for that last one. Hallucinations don’t serve as an adaptive response that helps the mice avoid detection, flee, or otherwise protect themselves against those who would seek to harm them. If anything, hallucinations seem to have the opposite effect, directing resources away from doing something useful as the mice would be responding to non-existent threats.

But when we’re talking about humans and not mice, some people seem to have a different sense for the issue: specifically, that we ought to expect something of a social predation – bullying – to cause people to develop psychosis. At least that was the hypothesis behind some recent research published by Dantchev, Zammit, and Wolke (2017). This study examined a longitudinal data set of parents and children (N = 3596) at two primary times during their life: at 12 years old, children were given a survey asking about sibling bullying, defined as, “…saying nasty and hurtful things, or completely ignores [them] from their group of friends, hits, kicks, pushes or shoves [them] around, tells lies or makes up false rumors about [them].” They were asked how often they experienced bullying by a sibling and how many times a week they bullied a sibling in the past 6 months (ranging from “Never”, “Once or Twice”, “Two or Three times a month”, “About once a week,” or, “Several times a week”). Then, at the age of about 18, these same children were assessed for psychosis-like symptoms, including whether they experienced visual/auditory hallucinations, delusions (like being spied on), or felt they had experienced thought interference by others.

With these two measures in hand (whether children were bullies/bullied/both, and whether they suffered some forms of psychosis), the authors sought to determine whether the sibling bullying at time 1 predicted the psychosis at time 2, controlling for a few other measures I won’t get into here. The following results fell out of the analysis: children bullied by their siblings and who bullied their siblings tended to have lower IQ scores, more conduct disorders early on, and experienced more peer bullying as well. The mothers of these children were also more likely to experience depression during pregnancy and domestic violence was more likely to have been present in the households. Bullying, it would seem, was influenced by the quality of the children and their households (a point we’ll return to later).

“This is for making mom depressed prenatally”

In terms of the psychosis measures, 55 of the children in the sample met the criteria for having a disorder (1.5%). Of those children who bullied their siblings, 11 met this criteria (3%), as did 6 of those who were purely bullied (2.5%), and 11 of those were both bully and bullied (3%). Children who were regularly bullied (about once a week or more), then, were about twice as likely to report psychosis than those who were bullied less often. In brief, both being bullied by and bullying other siblings seemed to make hallucinations more common. Dantchev, Zammit, and Wolke (2017) took this as evidence suggesting a causal relationship between the two: more bullying causes more psychosis.

There’s a lot to say about this finding, the first thing being this: the vast majority of regularly-bullied children didn’t develop psychosis; almost none of them did, in fact. This tells us quite clearly that the psychosis per se is by no means a usual response to bullying. This is an important point because, as I mentioned initially, some psychological strategies might evolve to help individuals deal with outside threats. Anxiety works because it readies attentional and bodily resources to deal with those challenges effectively. It seems plausible such a response could work well in humans facing aggression from their peers or family. We might thus expect some kinds of anxiety disorders to be more common among those bullied regularly; depression too, since that could well serve to signal that one is in need of social support to others and help recruit it. So long as one can draw a reasonable, adaptive line between psychological discomfort and doing something useful, we might predict a connection between bullying and mental health issues.

But what are we to make of that correlation between being bullied and the development of hallucinations? Psychosis would not seem to help an individual respond in a useful way to the challenges they are facing, as evidenced by nearly all of the bullied children not developing this response. If such a response were useful, we should generally expect much more of it. That point alone seems to put the metaphorical nail in the coffin of two of the three explanations the authors put forth for their finding: that social defeat and negative perceptions of one’s self and the world are causal factors in developing psychosis. These explanations are – on their face – as silly as they are incomplete. There is no plausible adaptive line the authors attempt to draw from thinking negatively about one’s self or the world to the development of hallucinations, much less how those hallucinations are supposed to help. I would also add that these explanations are discussed only briefly at the end of paper, suggesting to me not enough time or thought went into trying to understand the reasons these predictions were made before the research was undertaken. That’s a shame, as a better sense for why one would expect to see a result would affect the way research is designed for the better. 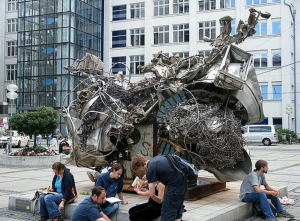 “Well, we’re done…so what’s it supposed to be?”

Let’s think in more detail about why we’re seeing what we’re seeing regarding bullying and psychosis. There are a number of explanations one might float, but the most plausible to me goes something like this: these mental health issues are not being caused by the bullying but are, in a sense, actually eliciting the bullying. In other words, causation runs in the opposite direction the authors think it does.

To fully understand this explanation, let’s begin with the basics: kin are usually expected to be predisposed to behave altruistically towards each other because they share genes in common. This means investment in your relatives is less costly than it would be otherwise, as helping them succeed is, in a very real sense, helping yourself succeed. This is how you get adaptations like breastfeeding and brotherly love. However, that cost/benefit ratio does not always lean in the direction of helping. If you have a relative that is particularly unlikely to be successful in the reproductive realm, investment in them can be a poor choice despite their relatedness to you. Even though they share genes with you, you share more genes with yourself (all of them, in fact), so helping yourself do a little better can sometimes be the optimal reproductive strategy over helping them do much better (since they aren’t likely to do anything even with your help). In that regard, relatives suffering from mental health issues are likely worse investments than those not suffering from them, all else being equal. The probability of investment paying off is simply lower.

Now that might end up predicting that people should ignore their siblings suffering from such issues; to get to bullying we need something else, and in this case we certainly have it: competition for the same pool of limited resources, namely parental investment. Brothers and sisters compete for the same resources from their parents – time, protection, provisioning, and so on – and resources invested in one child are not capable of being invested in another much of the time. Since parents don’t have unlimited amounts of these resources, you get competition between siblings for them. This sometimes results in aggressive and vicious competition. As we already saw in the study results, children of lower quality (lower IQ scores and more conduct disorders) coming from homes with fewer resources (likely indexed by more maternal depression and domestic violence) tend to bully and be bullied more. Competition for resources is more acute here and your brother or sister can be your largest source of it. 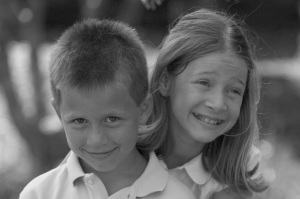 To put this into an extreme example of non-human sibling “bullying”, there are some birds that lay two or three eggs in the same nest a few days apart. What usually happens in these scenarios is that when the older sibling hatches in advance of the younger it gains a size advantage, allowing it to peck the younger one to death or roll it out of the nest to starve in order to monopolize the parental investment for itself. (For those curious why the mother doesn’t just lay a single egg, that likely has something to do with having a backup offspring in case something goes wrong with the first one). As resources become more scarce and sibling quality goes down, competition to monopolize more of those resources should increase as well. That should hold for birds as well as humans.

A similar logic extends into the wider social world outside of the family: those suffering from psychosis (or any other disorders, really) are less valuable social assets to others than those not suffering from them, all else being equal. As such, sufferers receive less social support in the form of friendships or other relationships. Without such social support, this also makes one an easier target for social predators looking to exploit the easiest targets available. What this translates into is children who are less able to defend themselves being bullied by others more often. In the context of the present study, it was also documented that peer bullying tends to increase with psychosis, which would be entirely unsurprising; just not because bullying is causing children to become psychotic.

This brings us to the final causal hypothesis: sometimes bullying is so severe that it actually causes brain damage that causes later psychosis. This would involve what I imagine would either be a noticeable degree of physical head trauma or similarly noticeable changes brought on by a body’s response to stress that causes brain damage over time. Neither hypothesis strikes me as particularly likely in terms of explaining much of what we’re seeing here, given the scope of sibling bullying is probably not often large enough to pose that much of a physical threat to the brain. I suspect the lion’s share of the connection between bullying and psychosis is simply that psychotic individuals are more likely to be bullied, rather than because bullying is doing the causing.