One day, a man is out shopping for an engagement ring in preparation to pop the question to his girlfriend. After a browse through a local jewelry store, he finds what he thinks is the perfect ring: It costs $3000, and even though he’s a man of modest means, he figures he can just afford it. As he prepares to make his purchase, another customer walks up to him and informs the man that the jewelry store down the block is having a going out a business sale and selling an identical ring for only $300.

What’s the boyfriend to do? Clearly, the ring on a 90% discount is the better deal, but something about buying a discount engagement ring just might not sit right with some people. While I don’t have any data on the matter, I could imagine that if the girlfriend in question found out that her (previously) stunning engagement ring was bought at a steep discount, she probably wouldn’t be pleased with her boyfriend’s financial responsibility, and that young bachelor who moved in down the hall might seem just a little more tall, dark, and handsome.

One of these rings will lead to a lifelong marriage and the other to not having a girlfriend; neither one leads to sex with that woman.

Pictured above is a $3000 diamond ring and a $300 cubic zirconia ring; try and tell the difference just by looking (good luck). The reason that a cubic zirconia ring, as opposed to traditional diamond one, would probably not sit well with many women is not because of any noticeable aesthetic quality of the ring itself.  There are, apparently, a number of ways to test and see whether you have a diamond or not, but that these tests exist (and can often be inconclusive to many) demonstrates that untrained people without special tools or knowledge have a hard time telling the two apart (which the comments confirm; many suggest the best way to tell them apart is always to ask an expert). In the specific case I gave initially, the two rings would, in fact, be identical in design and material, so the only difference would be the cost.

In the case of engagement rings, however, cost is the point. The high cost of an engagement ring functions as an honest signal; not honest in sense that they ensure fidelity or a lasting relationship, but honest in the sense that the signal is hard to fake. A poorer man could not afford a more expensive ring and his rent and his drinking problem. Dave Chapelle summed up this principle nicely when he said, “If a man could fuck a woman in a cardboard box, he wouldn’t buy a house”. 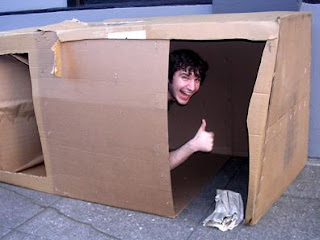 Not only does he still get laid all the damn time, but he didn’t have to give up drinking either.

This is precisely the reason people care about whether there’s a diamond or a cubic zirconia in jewelry; while both are sparkly, only one represents an honest signal, where the other is a fake signal that does not reliably distinguish between the ability to invest and inability to do so; one can signal a willingness to invest, whereas the other does not signal as well.

Examples of signaling abound in the biological world, and for good reason: when the sex that does the most investing in offspring – typically the female – is seeking out a mate, they need to assess the quality of the many potential mates. Since the investing one will be stuck with the consequences, good or bad, for a long time, it’s in their best interests to be more selective to get the best package of genes and/or investment. Males displaying costly ornaments – like peacocks – or behaviors – like bowerbirds – are able to demonstrate they can afford to shoulder the hard to fake costs involved in growing/maintaining them and still survive and flourish; they have been “tested” and they passed, guaranteeing their fitness to the choosy opposite sex (Zahavi, 1975).

We’ve all dealt with the inconvenience of pants that are too long at some point: you occasionally step on them, they shred as you walk along the street, they get dirty as they drag, water soaks up the back of them and feels awful on your legs, and that’s only for pants that a slightly too long. Imagine having a pair of jeans that happen to be a few feet too long, that you make yourself, you can never take off, and all your prospective partners will judge you by their quality. Also, lions are trying to eat you. 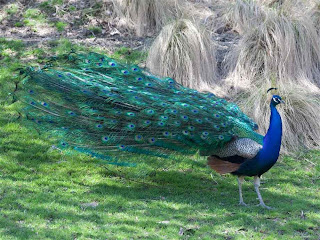 Seriously, this thing is practically begging to be killed.

Only those who are able to find the required materials, invest the time and skill in building, cleaning, and maintaining the pants would be able to keep them in viewable shape. Further, those pants would be serious inconvenience when it comes to doing just about anything, so only those who were particularly able would be able to maintain garments like them and still function. Lazy, unskilled, careless, and/or clumsy people would reflect those unfavorable qualities in the state of their pants. One could take off the pants to avoid all the wasteful insanity, but in doing so they’d be all but committing themselves to a lifetime of celibacy, as those still wearing the pants would attract the partners.

If you’re a good observer – and I know you are – you’ll probably have noticed that costly signaling can take many forms: from engagement rings, to bodily ornaments, to behavior. Costly signaling is relatively context independent: the important factor is merely that the behavior is hard to fake and expensive, in terms of time, money, energy, foregone opportunities, risk, etc. It can be used for a variety of goals, such as courting mates, impressing potential allies, or intimidating rivals. We all engage in it, to varying degrees, in different ways, for several purposes, likely without realizing most of it (Miller, 2009). It’s something fun to think about next time you slip into an expensive designer shirt or rail against the evils of branded products.