I have a new theory that goes something like this: social psychologists have a need to believe in their own hypotheses – a belief in the truth of their hypotheses (or BTH for short). When evidence turns up that is “threatening” the truth of these beliefs, psychologists try to defend their hypotheses and restore their belief in their veracity. This can be achieved either through psychologists reinterpreting contradictory evidence into confirmatory evidence, or through the psychologists modifying their hypotheses but insisting that the new hypothesis was the one they really believed in the whole time. While some evolutionary theorists might try to explain these perceptual shifts in terms of some adaptive function (such as, say, maintaining social status amongst one’s peers, trying to obtain grant money, or make oneself an attractive job candidate, rather than just trying to “be correct”), they have done little in terms of considering whether BTH plays a role in the often-silly ways that social psychologists tend to behave.

Pictured: The co-authors on my new BTH paper.

Now I know some of you out there might have some qualms with my BTH theory. Some of you might point out, for instance, that BTH theory merely describes a pattern of results and then tries to explain those results in a circular fashion: specifically, the fact the psychologists seem to hold to incorrect beliefs is “explained” by my positing that psychologists have a desire to hold to incorrect beliefs. The evolutionary account, on the other hand, provides a real explanation that allows us to escape from that kind of circularity. Still others might point out that these two theories -  the evolutionary and the BTH theory – need not be viewed as competing with one another: on the proximate level they both make the same predictions. The only difference is that one of these theories provides an ultimate explanation for these proximate predictions. The more astute among my readers might even take some issue with those who raise this second point, however, noting that, while both theories could plausibly account for the same proximate findings, my BTH theory is massively underspecified: it doesn’t predict the contexts in which we ought to expect psychologists’ behavior to vary, so it’s not immediately clear how BTH generates its predictions. Perhaps, like many social-psychological theories, BTH generates its predictions through researcher intuitions, personal experiences, or perhaps it simply predicts results on the basis of what other people researching BTH have found.

So BTH theory sounds like an incomplete explanation at it’s very best, unlikely to do much to further our understanding of the phenomenon in question. I would also add that the hypothetical BTH theory has quite a lot in common with belief in a just world theory, or BJW for short. BJW theory begins by asserting that people have a need to believe in a just world; a belief complicated by the fact that the world is frequently not just or fair (whatever just and fair are supposed to mean here, anyway. I think it’s supposed to mean that “good” things are supposed to happen to “good” people and “bad” things are supposed to happen to “bad” people, but that just pushes the definition problem back a step than really dealing with it). As the world seems to frequently not agree with the biases of our just world beliefs, people do the sensible thing and try to “restore balance” by manipulating their perceptions of these “threatening” facts. So, to recap, people are supposed to have some need to believe something wrong, and will do so by manipulating otherwise accurate information. Sure; there are costs to being wrong, and BJW theory doesn’t really explain the adaptive value to being wrong in this case, but, to be fair, BJW theory doesn’t really explain anything, so at least it’s consistent in that regard.

Incorrectly believing that BJW theory helps use explain things, Callan et al (2007) sought to expand the BJW line of research into the realm of physical attractiveness. More precisely, Callan et al (2007) felt that a BJW might help us understand the “beauty is good” stereotype. Somewhat ironically, the authors note that, yes, evolutionary-minded researchers have suggested at least one very plausible reason why people might be more inclined towards physically attractive individuals (I think there happen to be more than one, but one is listed), but then make no attempt to demonstrate how their favored BJW theory is distinguished from or fits within this evolutionary theory. In any case, they did seek to show something neat: that harm directed towards more attractive women might be viewed as more unjust and more deserving of punishment than harm directed towards less attractive women. This was predicted on the supposition that, since people view beauty as a “good” thing, beautiful people will be viewed as having done good things to, in some sense, deserve their beauty. 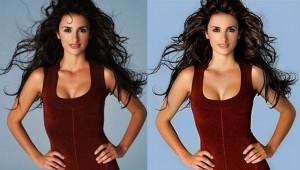 Like having someone put in all that time with Photoshop.

In the first study, 48 subjects read a fake news story about a woman who died due to poor maintenance of the apartment that she lived in accompanied with either a highly-attractive or unattractive photo of a woman from HotorNot.com. The woman was subsequently described as being “kind, generous, about to graduate from university, a youth center volunteer, and excited about her future”, making her sound like a “good” person. As predicted, people perceived the attractive woman as a better person than the unattractive one, there to have been more injustice in case where the attractive woman was harmed, and felt more punitive towards the people who failed to maintain the apartment. The results here are nice and precisely what the previously-mentioned evolutionary theory would have predicted but, unfortunately, they lack a number of important groups. For instance, there was no group in place to compare an attractive but “bad” person against an unattractive but “good” person, nor is there any control group to compare the results against. Still, it’s a promising first step.

As their second step, the authors had 36 subjects read another story about a woman who was hurt in a house fire, along with a picture of her. In one version of the story, the woman is described as having escaped any serious harm, whereas in the second version the woman was described as having suffered a great deal of harm. Later, subjects were asked to identify the picture of the woman in the story from an array of seven digitally-altered versions of the picture that were either more or less attractive than the original (the original one wasn’t in the display). The authors found that people viewed the greater harm as being more unjust than the minimal harm, as expected. They also tended to pick a less-attractive version of the woman’s picture when the woman experienced greater harm. Finally, people evaluated the woman in the greater-harm condition more positively.

Do these findings support the BJW theory? It’s pretty hard to say for one major reason: it’s unclear as to what counts as evidence for or against BJW theory. In the greater-harm condition, subjects picked a less-attractive picture which, in light of the BJW idea, would seem to suggest the following: that the harm was “bad” and, since “bad” things happen to “bad” people, the woman must have been a “bad” person who didn’t deserve to be attractive. Of course, this is somewhat inconsistent with the idea that the harm itself was viewed as “more unjust” than the minimal harm condition. If the harm was “unjust”, then that would imply that a “bad” thing was happening to a “good” person who should, in turn, deserve to be attractive. So that seems complicated. Further, if the woman was viewed as “bad” and thus less deserving of attractiveness, it’s unclear why people would evaluate her character more positively. This returns to a point I made earlier: the BJW theory seems to derive massively under-specified predictions. With enough creativity, it seems that many possible patterns of data could be viewed as entirely consistent with the theory. 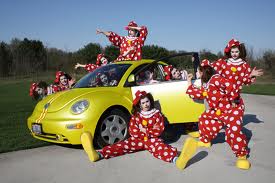 Just like how  with enough creativity, my co-authors on the BTH theory manage to all car-pool together.

Needless to say, as my BTH theory would predict, the authors conclude that their results supported and built upon BJW theory, despite the evidence being ambiguous in that regard. From my reading of their theory, it’s still not at all clear what pattern of results would be inconsistent with BJW theory, much less is it clear as to how the predictions were being derived from this theory in the first place. I find it a bit discouraging that the authors were least aware of the evolutionary ultimate level of analysis, but failed to make any use of it. Then again, perhaps the evolutionary analysis was viewed as too “threatening” to their belief in BJW theory, leading them to downplay the former. I think the evidence is ambiguous enough to reach that conclusion, in any case.