Whatever your personal views on the book, one would have a hard time denying the popularity of 50 Shades of Grey, which has sold more than 70 million copies worldwide. The Harry Potter series manages to dwarf that popularity, having sold over 450 million copies worldwide. While books like these have garnered incredible amounts of attention and fandom, hundreds of thousands of other books linger on in obscurity, while others never even see print. It’s nearly impossible to overstate that magnitude of difference in popularity. Similar patterns hold across other domains of cultural products, like music and academia; some albums or papers are just vastly more notable than the rest. For anyone looking to create, then, whether that creation is a book, music, a scholarly paper, or a clothing brand, being aware of factors that separate out the bestsellers from the bargain bin can potentially make or break the endeavor.

One of the problems that continuously vexes those who decide which cultural products to invest in is the matter of figuring out which investments are their best bets. For every Harry Potter, Snuggie, or Justin Bieber, there are millions of cultural products and creators who will likely end up resigned to the dustbin of history (if the seemingly-endless lines of people auditioning for shows like American Idol and (ahem) writing blogs are any indication). Despite this tremendous monetary incentive in finding the next big thing, predicting who or what it will turn out to be is incredibly difficult. Some of these cultural products seem to take on a life all their own, despite initially being passed over: for instance, the Beatles were at one point told they had “no future in show business”  before rocketing to international and intergenerational fame. Whoops. Others draw tremendous amounts of investment, only to come up radically short (the issues surrounding the video game Kingdoms of Amalur serve as a good example).

What could have inspired such colossal mistakes? The answer is probably not that the people doing the investing are stupid, wicked, or hate money (in general, at least; some of them may well be any of these things individually); a more likely reason can be summed up by what’s called the Matthew effect. Named after a passage from the Gospel of Matthew, the basic principle is that the rich get richer, while the poor get poorer (also summarized in the Alice Cooper song “Lost in America”). Framed in terms of cultural products, the principle is that as something – be a book, song, or anything else – becomes popular, it will become more popular in turn because of that popularity. Obviously this becomes a problem for anyone trying to predict the success of a cultural product, because when they start out that key variable can’t be readily assessed with much precision; it’s simply not one of the inherent characteristics of the product itself. Even if the product itself is solid in every measurable respect, that’s not a guarantee of success.

While such a proximate explanation sounds appealing, solid experimental evidence of such an effect can be difficult to come by; reality is a large and messy place, so parceling out the effect of popularity can be tricky. Thankfully, some particularly clever researchers managed to leverage the power of the internet to study the effect. Salganik, Dodds, & Watts (2006) began their project by asking people on the internet to do one of the things they do best: download music (taking the coveted third-place spot of popular online activites, behind viewing pornography and complaining). The participants (all 14,341 of them) were invited to listen to any of 48 songs from new artists and, afterwards, rate and download them for free if they so desired (they couldn’t download until they listened). In the first condition, people were just presented with the songs in a random grid or list format and left to explore. In the second condition (the social world), everything was the same as the first, except the listeners were given one other key piece of information: how often that song had been downloaded by others.

And you want to like the same music as all those strangers, don’t you?

Further – and this is the rather clever part – there were eight of these different social worlds. This resulted in each world having initially-different numbers of downloads; which songs were the most downloaded initially in one world were not necessarily the most popular in another, depending on who listened and downloaded first. Salganik et al (2006) were able to report a number of interesting conclusions from these different worlds: first, the “intrinsic” quality of the songs themselves – as assessed by their download count in the asocial world – did tend to predict that song’s popularity in the social worlds. Those songs which tended to do good without the social information also tended to do good with it. That said, the social information mattered quite a bit As the authors put it:

When the social information was present, the ultimate popularity of a song became harder to predict; this was especially the case when the information was presented as an ordered list, from most popular to least (as bestseller lists often are), relative to the grid format. On top of the greater unpredictability generated by the social information, there was also an increase in the inequality of popularity. That is, the most popular songs were substantially more popular than the least popular in the social conditions, relative to the asocial ones. In short, the information about other people’s preferences generated more of a winner-takes-all type of environment, and who won became increasing difficult to predict.

This study was followed up by a 2008 paper by Salganik & Watts. In this next study, the design was largely the same, but the authors attempted to add a new twist: the possibility of a self-fulfilling prophecy. Might a “bad” song be able to be made popular by manipulating other people’s beliefs about how many others had downloaded it? Another 12,207 subjects were recruited to again listen to, rate, and download songs. Once the social worlds were initially seeded with download information from the first 2,000 people, the researchers then went in and inverted the ordering: the most and least popular songs switched their download counts, then second most and second least popular, and so on until the whole list was reversed. The remaining 10,000 subjects saw the new download counts, but everything else was left the same.

In the initial, unmodified worlds, each person listened to 7.5 of the 48 songs and downloaded 1.4 of them, on average. Unsurprisingly, people tended to download the songs they gave the highest ratings to. Somewhat more surprisingly, the fake download counts also pushed the previously-unpopular songs towards much higher degree of popularity: when the ranks weren’t inverted, there was a good correlation in the pre- and post-manipulation points (r = 0.84); when the ranks were inverted, that correlation dropped off to near non-existence (r = 0.16). The mere illusion of popularity was not absolute, though: over time, the initially “better” songs tended to regain some of their footing after inversion. Further, the songs in the inverted world tended to be listened to (average 6.3) and downloaded (1.1) less overall, suggesting that people weren’t as thrilled about the “lower-quality” songs they were now being exposed to in greater numbers. 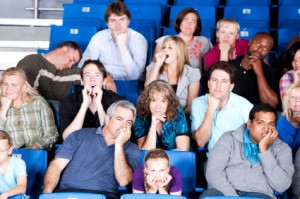 “If none of us applaud, maybe we won’t encourage them to keep playing…”

Towards the end of their paper, the authors also dip into some strategic thinking, likening this effect to a tragedy-of-the-commons-style signaling problem: each creator has an interest in sending inflated signals about the popularity of their product, so as to garner more popularity, but as the number of these signals increases, their value decreases, and all the art as a whole suffers (a topic I touched on lately). I think such a speculation is a well-founded beginning, and I would like to see that line of reasoning taken further. For instance, there are some bands who might settle for a more niche-level popularity at the expense of broader appeal (i.e. the big fish in the small pond, talking about how the bigger fish in the bigger pond are all selling out, mass-produced products for crowds of mindless sheep; or just imagine someone going on endlessly about how bad twilight is at every opportunity they get). Figuring out why people might embrace or reject certain kinds of popularity could open the door for new avenues of profitable research.