I hate my smoke detector. Right now it’s laying disassembled on the table in my living room because it apparently thought my chicken was a fire hazard. That I’m talking about my smoke detector as having thoughts in the first place is rather odd, but it’s just a metaphor that we all understand, right? It’s not like people ever direct aggression, real or imagined, against tools that aren’t working as you’d prefer. 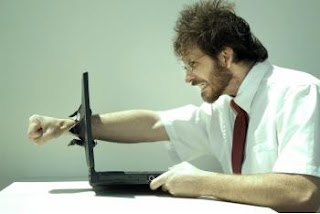 From computers, to cars, to imagined supernatural beings, people see agency where none exists – if not directly “see” it, then act as if they do. They will curse them, direct physical aggression towards them, and they will plead with them. Even though most people will tell you they understand begging their car to not run out of gas won’t actually affect how far the car will eventually travel, one can imagine – has perhaps even experienced – the satisfaction some people get from breaking an old, less-than-functional piece of equipment because it was out to make their life miserable (the fax machine from Office Space comes to mind).

Part of what we see going on here is like my smoke detector problem (also known as Error Management Theory). The intended purpose of a smoke detector is to warn someone about an actual fire by using a typical cue that a fire would give off – the smoke. Needless to say, this also makes the smoke detector have the annoying habit of going off when something is cooking/burning – or in my case, having the stove on (my smoke detector is particularly annoying). One way to avoid this irritation would be to make smoke detectors less sensitive so they wouldn’t go off during cooking dinner and all-night bong parties. However, doing so runs the risk of not making it sensitive enough to go off when there’s a real fire, or not going off until it’s too late. This doesn’t mean that the best course of action is to turn up the sensitivity all the way, otherwise it would go off constantly, making the false alarms far too annoying; the key is finding that happy medium.

In the case of inanimate objects being labeled as enemies, part of the issue could be an agency-detection module in our brain getting triggered by an inappropriate stimulus because of the way it’s calibrated: to be more sensitive to potentially important cues in order to avoid missing them. It’s better to just be startled by what you thought was movement than to miss real movement that could mean real harm. In other cases, modules for aggression or negotiation could be triggered by the frustration of one of our goals, like being unable to fax a letter or view pornography quickly enough. While those behaviors might be useful ways of dealing with social creatures, they also get inappropriately recruited for some non-social ones.

Something similar can be seen happening between men and women’s perception of sexual interest. In the case of a smoke detector, both sexes are open to the same cost and benefits of false alarms and real fires; in the world of mating, this isn’t always the case. It would be costlier for men – in terms of reproduction – to miss signals of potentially sexually interested women than the reverse. According to Buss (2003), this would explain why men are far more likely to infer sexual interest in women who are smiling at them or touching them (or talking to them, hanging out with them, sending them nude pictures, being alive, etc).  In case there are any women out there who haven’t figured this out yet, almost all of your guy friends are waiting for you to come around and see things their way, they’re just a bit more patient than the drunk guy at the bar. 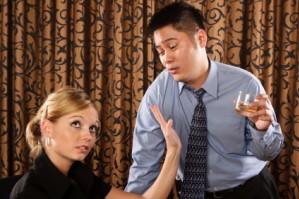 “I couldn’t help but noticed I touched your ass while you were dancing. Do you have a phone number?”

Perceptions of attractiveness are another area where the sexes would appear to differ. According to Okcupid – which is a reputable source of scientific data when I find it convenient – women tend to differ in their appraisals of male attractiveness, rating the vast majority of men as being below average in attractiveness. This statistical impossibility could be reflective of the fact that a “wrong” mating choice on the part of a woman is reproductively costlier on average than the wrong choice on the part of men. Or maybe it’s all because of this nasty “culture” going around. Yeah, let’s go with that….