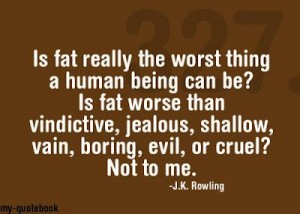 I don’t know whether it was actually J.K. Rowling who wrote/said that, but as a shallow, vain, and boring person who also happens to be in great shape, this quote really speaks to me; no doubt it also speaks to the deeper, selfless, and interesting portion of the population who read the quote surrounded by stacks of old pizza boxes and empty cartons of Ben and Jerry’s, but I get the sense it speaks to us in different ways (I also get the sense my keyboard is substantially less sticky).

Whoever is being quoted would appear to be implying something like the following: “Someone might be unhealthy/unattractive, but they could be X instead, which is worse. Therefore, being fat is OK”.  The logical shortcomings of that implication are so vast that the author has either never taken a philosophy class or has a PhD in the subject. I’d doubt Rowling’s(?) commitment to that line of thought in any case, simply by pointing out the actors in the Harry Potter films are less than fat – far less so than the population at large – meaning plenty of good actors probably got passed over because they were fat. More importantly, the entire quote is a red herring; a statement intended to distract attention away from the matter at hand.

Consider an alternative, but similar statement: Is a little thievery the worst thing someone can do? Is it worse than murder, rape, or physical assault? Not to me. The problem should become apparent here very quickly; whether or not Y is worse than X should have no bearing on the status of X. Whatever X is, it needs to be able to stand on its own feet. There is one case where there is an exception, and that’s concerning a certain parking ticket issued to me. Parking police, go fight some real crime. There are bigger concerns out there than whether I probably accidentally parked in a handicapped spot for a few hours. I already had to get my car out of impound; isn’t that enough for you people? It’s not like I was drunk driving. Or fat.

So  what does this quote tell us about how human psychology functions? One potential lesson we could take from it is that people are bad at justifying things coherently (see my last post, and probably future ones). Of greater interest, however, is the fact that people are interested in justifying their behavior as intensely as they are.

I remember seeing a commercial for yogurt on TV not so long ago that made fun of this bit of peculiar psychology. A woman is seen standing in front of a fridge, eying some cake. She thinks to herself that she could eat some celery and the cake, and somehow the celery would cancel the cake out. Women; am-i-right fellas? She wants to eat that cake and is trying to justify doing so to herself. There are two things to say about that: first, it’s great evidence for modularity of the mind, as if anymore was needed. Second, what good could those justifications possibly be? (They certainly don’t work out all the time)

To start at answering that question, let’s examine some research by Larson and Capra (2009) on the subject of what’s called “Moral Wiggle Room”. The research involved a dictator game; it’s a classic economic research design in which one player is designated the “dictator” and another player is designated to lie there and take it…. I mean, the “receiver”. The dictator is given a sum of money, say $10, and the ability to decide how the money is to be divided. Whatever the dictator decides is what goes, so if the dictator wants to keep $9 and give $1 to the receiver, so be it. Not only is it a neat way to examine certain aspects of our psychology, but it’s also an effective way of disappointing people in the name of science. Talk about killing two birds with one stone.

Research on Moral Wiggle Room goes (basically) as follows: In one group, the dictators need to decide between a higher payoff for themselves and a lower payoff for someone else, or a lower payoff for themselves that gives the receiver more money (A $6/$1 option or a $5/$5 option), or between payoffs that benefit both parties ($6/$5 option or a $5/$1 option). Another group of dictator’s payments look like the following: $6/$? or $5/$? While these dictators don’t know up front what the receiver will get, they can find out for free. With the click of a button, they can reveal the payoffs; it costs nothing in terms of time or money to find out. So what do people do?

In the first group, where payments are known, about 75% of dictators choose the fair option, so maybe life in the Soviet Union really wasn’t that bad. What happens when dictators are given the choice to not know how their actions will affect others? Slightly more than half of them choose to remain ignorant and not reveal the payoffs; of that 50%, who didn’t reveal, 100% took the higher offer. (The ones who revealed weren’t exactly saints either, since over half took the higher payment at the expense of the receiver)

Why might people not want to know how their actions effect others, even when it costs nothing to know? For starters, being strategically ignorant can only help them in terms of payoff: best case scenario, they find out the option that’s better for them is better for someone else as well  and they take it anyway; worst case, they now have access to information that opens possibilities for creating expectations of certain treatment in which their wallets are now a slightly lighter (in theory anyway. While these games are played anonymously, we’re all still sitting here judging their actions to ourselves, demonstrating the point). However, by remaining ignorant, they can also honestly claim they didn’t know they were making someone worse off. This could allow them to benefit indirectly (they may be able to better persuade others that they’re morally upstanding citizens or avoid punishment for their actions more effectively, should they come to light, without needing to lie about it) in addition to the direct benefits (they made more money).

Of course, these games are played at low-stakes, information is free, easy to obtain, and unambiguous, while decisions are made anonymously. One could think of how the results could change when any of those factors do. While things can get messy quickly, there are clearly cases in which the reasons for not knowing are better than knowing for some. My guess is that those reasons center around persuasion through justification, specifically being able to convince people that what you did was OK because you didn’t know how other people would feel. While that argument happens to be a red herring in the case of the research reviewed here – they could have found out if they wanted – we should not forget that red herrings are used as often as they are because they have a habit of working. And by working, I mean they can help make people forget you’re full of shit because they’re looking somewhere else.