When people post videos on YouTube, one major point of interest for content creators and aggregators is to capture as much attention as possible. Your video is adrift in a sea of information and you’re trying to get as many eyes/clicks on your work as possible. In that realm, first impressions are all important: you want your video to have an attention-grabbing thumbnail image, as that will likely be the only thing viewers see before they actually click (or don’t) on it. So how do people go about capturing attention in that realm? One popular method is to ensure their thumbnail has a very emotive expression on it; a face of shock, embarrassment, stress, or any similar emotion. That’s certainly one way of attracting attention: trying to convince people there is something worth looking at, not unlike articles titled along the lines of five shocking tips for a better sex life (and number 3 will blow your mind!). Speaking of sex, that’s another popular method of grabbing attention: it’s fairly common for video thumbnails to feature people or body parts in various stages of undress. Not much will pull eyes towards a video like the promise of sex (and if you’re feeling an urge to click on that link, you’ll have experienced exactly what I’m talking about). 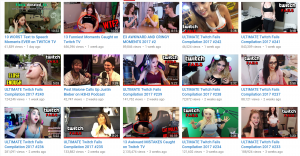 Case in point: most of that content is unrelated to the featured women

If sex happens to be attention grabbing, the natural question arises concerning what you might do with that attention once you have it. Much of the time, that answer will involve selling some good or service. In other words, sex is used as a form of advertising to try and sell things. “If you enjoyed that picture of a woman wearing a thong, you’ll surely love our reasonably-costed laptops!”. Something along those lines, anyway. Provided that’s your goal, lots of questions naturally start to crop up: How effective is sex at these goals? Does it capture attention well? Does it help people notice and remember your product or brand? Are those who viewed your sexy advert more likely to buy the product you’re selling? How do other factors – the sex of the person viewing the ad – contribute to your success in these realms?

These are some of the questions examined in a recent meta-analysis by Wirtz, Sparks, & Zimbres (2017). The researchers searched the literature and found about 80 studies, representing about 18,000 participants. They sought to find out what effects featuring sexually provocative material had, on average (defined in terms of style of dress, sexual behavior, innuendo, or sexual embeds, which is where hidden messages or images are placed within the ad, like the word “sex” added somewhere to the picture, which is something people apparently think is a good idea sometimes). These ads had to have been compared against a comparable, non-sexual ad for the same product to be included in the analysis to determine which was more effective.

The effectiveness of these ads were assessed across a number of domains as well, including ad recognition (in aided and unaided contexts), whether the brand being advertised in the ad could be recalled (i.e., were people paying attention to just the sex, or did they remember the product?), the positive or negative response people had to the ad, what people thought about the brand being advertised with sex, and whether the ad actually got them interested in purchasing the product (does sex sell?).

Finally, a number of potentially moderating factors that might influence these effects were considered. The first of these was gender: did these ads have different impacts on men and women? Others factors included the gender of the model used in the advertisement, the date the article was published (to see if attitudes shifted over time), the sample used (college students or not), and – most interestingly – product/ad congruity: did the type of product being advertised matter when it came to whether sex was effective? Perhaps sex might help sell a product like sun-tan lotion (as the beach might be a good place to pick up mates), but be much less effective for selling, say, laptops. 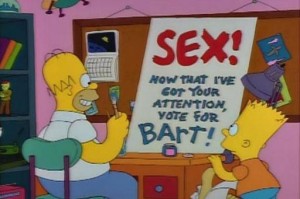 In terms of capturing attention, sex works. Of the 20 effects looking at the recall for ads, the average size was d = .38. Interesting, this effect was slightly larger for the congruent ads (d = .45), but completely reversed for the incongruent ones (d = -.45). Sex was good at getting people to remember ads selling a sex-related product, but not just generally useful. That said, they seemed better at getting people to remember just the ads. When the researchers turned to the matter of whether the brands within the ads were more likely to be recalled, the 31 effects looking at brand recognition turned out to barely break zero (d = .09). While sex might be attention-grabbing, it didn’t seem especially good at getting people to remember the objects being sold.

Regarding people’s attitudes towards the ads, sex seems like something of a wash (d = -.07). Digging a little deeper revealed a more nuanced pictured of these reactions, though: while sexual ads seemed to be a modest hit with the men (d = .27), they had the opposite effect on women (d = -.38). Women seemed to dislike the ads modestly more than men liked them, as sexual strategies theory would suggest (for the record, the type of model being depicted didn’t make much of a difference. In order, people liked males models the least (d = -.28), then female models (d = -.20), and couples were mildly positive, d = .08).

Curiously, both the men and women seemed to be agreement regarding their stance towards brands that used sex to sell things: negative, on the whole (d – =.22). For women, this makes some intuitive sense: they didn’t see to be a fan of the sexual ads, so they weren’t exactly feeling too ingratiated towards the brand itself. But why were the men negatively inclined towards the brand if they were favorably inclined towards the ads? I can only speculate on that front, but I assume it would have something to do with their inevitable disappointment: either that the brands were promising on sex the male customers likely knew they couldn’t deliver on, or perhaps the men simply wanted to enjoy the sex part and the brand itself ended up getting in their way. I can’t imagine men would be too happy with their porn time being interrupted by an ad for toilet paper or fruit snacks mid-video.

Finally, turning the matter of purchase intentions – whether the ads encouraged people to want to buy the product or not – it seemed that sex didn’t really sell, but it didn’t really seem to hurt, either (d = .01). One interesting exception in that realm was that sex appeals were actually less likely to get people to buy a product when the product being sold was incongruent with the sexual appeal (d = -.24). Putting that into a simple example, the phrase “strip club buffet” probably doesn’t wet many appetites, and wouldn’t be a strong selling point for such a venue. Sex can be something of a disease vector, and associating your food with that might illicit more than a bit of disgust. 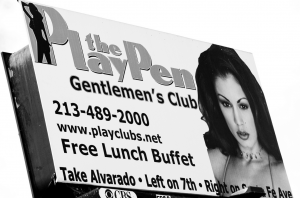 “Oh good, I was starving. This seems like as good a place as any”

As I’ve noted before, context matching matters in advertising. If you’re looking to sell people something that highlights their individuality, then doing so in a mating context works better than in a context of fear (as animals aren’t exactly aiming to look distinct when predators are nearby). The same seems to hold for using sex. While it might be useful for getting eyes on your advertisement, sex is by no mean guaranteed to ensure that people like what they see once you have their attention. In that regard, sex – like any other advertising tool – needs to be used selectively, targeting the correct audience in the correct context if it’s going to succeed at increasing people’s interest in buying. Sex in general doesn’t sell. However, it might prove more effective for those with more promiscuous attitudes than those with more monogamous ones; it might prove useful if advertising a product related to sex or mating, but not useful for selling domain names (like the old GoDaddy commercials; coincidentally, GoDaddy was also the brand I used to register this site); it might work better if you associate your product with things that lead to sex (like status), rather than sex itself. These are all avenues worth pursuing further to see when, where, and why sex works or fails.

That said, it is still possible that sex might prove useful, even in some inappropriate contexts. Consider the following hypothetical example: people will consider buying a product only after they have seen an advertisement for it. Advertisement X isn’t sexual, but when paired with the product will increase people’s intentions to buy it by 10%. However, it will also not really get noticed by many people, as the content is bland. By contrast, advertisement Y is sexual, will decrease people’s intentions to buy a product by 10%, but will also get four-times as many eyes on it. The latter ad might well be more successful, as it will capture the eye of more potential customers that may still buy the product despite the inappropriate use of sex. While targeting advertisements might be more effective, the attention model of advertising shouldn’t be ruled out entirely, especially if targeting advertising would prove too cumbersome.