Being that it’s summer, I’ve decided to pretend I’m going to kickback once more from working for a bit and write about a more leisurely subject. The last time I took a break for some philosophical play, the topic was Tucker Max’s failed donation to Planned Parenthood. To recap that debacle, there were many people who were so put off by Tucker’s behavior and views that they suggested that Planned Parenthood accepting his money ($500,000) and putting his name on a clinic would be too terrible to contemplate. Today, I’ll be examining two fallacies that likely come from an largely-overlapping set of people: those who consider themselves feminists. While I have no idea how common these views are among the general population or even among feminists themselves, they’ve come across my field of vision enough times to warrant a discussion. It’s worth noting up front that these lines of reasoning are by no means limited strictly to feminists; they just come to us from feminists in these instances. Also, I like the alliteration that singling that group brings in this case. So, without any further ado, let’s dive right in with our first fallacy. 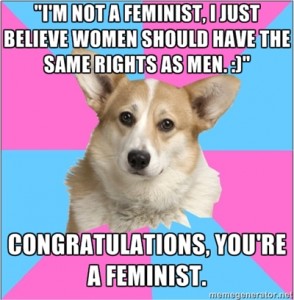 Exhibit A: Colorful backgrounds do not a good argument make.

For those of you not in the know, the above meme is known as the “Critical Feminist Corgi”. The sentiment expressed by it – if you believe in equal rights, then you’re a feminist – has been routinely expressed by many others. Perhaps the most notable instance of the expression is the ever-quotable “feminism is the radical notion that women are people“, but it comes in more than one flavor. The first clear issue with the view expressed here is reality. One doesn’t have to look very far to find people who do not think men can be feminists. Feminist allies, maybe, but not true feminists; that label is reserved strictly for women, since it is a “woman’s movement”. If feminism was simply a synonym for a belief in equal rights or the notion that women are people, then that this disagreement even exists seems rather strange. In fact, were feminism a synonym for a belief in equal rights, then one would need to come to the conclusion that anyone who doesn’t think men can be feminists cannot be a feminist themselves (in much the same way that someone who believes in a god cannot also be an atheist; it’s simply definitional). If those who feel men cannot be feminists can themselves still be considered feminists (perhaps some off-brand feminist, but feminist nonetheless), then it would seem clear that the equal-rights definition can’t be right.

A second issue with this line of reasoning is more philosophical in nature. Let’s use the context of the corgi quote, but replace the specifics: if you believe in personal freedom, then you are a Republican. Here, the problems become apparent more readily. First, a belief in freedom is neither necessary or sufficient for calling oneself a Republican (unlike the previous atheist example, where a lack of belief is both necessary and sufficient). Second, the belief itself is massively underspecified. The boundary conditions on what “freedom” refers to are so vague that it makes the statement all but meaningless. The same notions can said to apply well to the feminism meme: a belief in equal rights is apparently neither necessary or sufficient, and what “equal rights” means depends on who you ask and what you ask about. Finally, and most importantly, the labels “Republican” and “Feminist” appear to represent approximate group-identifications; not a single belief or goal, let alone a number of them. The meme attempts to blur the line between a belief (like atheism) and group-identification (some atheist movement; perhaps the Atheism+ people, who routinely try to blur such lines).

That does certainly raise the question as to why people would try and blur that line, as well as why people would resist the blurring. I feel the answer to the former can be explained in a similar manner to why a cat’s threat display involves puffed-up fur and their backs arched: it’s an attempt to look larger and more intimidating than one actually is. All else being equal, aggressing against a larger or more powerful individual is costlier than the same aggression directed towards a less-intimidating one. Accordingly, it would seem to also follow that aggressing against larger alliances is costlier than aggressing against smaller ones. So, being able to suggest that approximately 62% of people are feminists makes a big difference, relative to suggesting that only 19% of people independently adopt the label. Of course, the 43% of people who didn’t initially identify as feminists might take some issue with their social support being co-opted: it forces an association upon them that may be detrimental to their interests. Further still, some of those within the feminist camp might also wish that others would not adopt the label for related reasons. The more feminists their are, the less social status can be derived from the label. If, for instance, feminism was defined as the belief that women are people, then pretty much every single person would be feminist, and being a feminist wouldn’t tell you much about that person. The signal value of the label gets weakened and the specific goals of certain feminists might become harder to achieve amongst the sea of new voices. This interaction between relative status within a group and signal value may well help us understand the contexts in which this blurring behavior should be expected to be deployed and resisted. 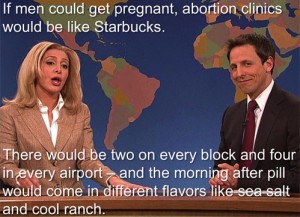 Exhibit B: Humor does not a good argument make either.

The second fallacy comes to us from Saturday Night Live, but they were hardly the innovators of this line of thought. The underlying idea here seems to be that men and women have different and relatively non-overlapping sets of best interests, and the men are only willing to support things that personally inconvenience them. Abortion falls on the female-side of the best interests, naturally. Again, this argument falters on both the fronts of reality and philosophy, but I’ll take them in reverse order this time. The philosophical fallacy being committed here is known as the Ecological Fallacy. In this fallacy, essentially, each individual is viewed as being a small representative of the larger group to which they belong.  An easy example is the classic one about height: just because men are taller than women on average, it does not mean that any given male you pull from the population will be taller than any given female. Another more complicated example could involve IQ. Let’s say you tested a number of men and women on an IQ test and found that men, on average, performed better. However, that gap may be due to some particularly well-performing outlier males. If that’s the case, it may be the case that the “average” man actually scores worse than the “average” woman by in large, but the skewed group distributions tell a different story.

Now, onto the reality issues. When it comes to question of whether gender is the metaphorically horse pulling the cart of abortion views, the answer is “no”. In terms of explaining the variance in support for abortion, gender has very little to do with it, with approximately equal numbers of men and women supporting and opposing it. A variable that seems to do a much better job of explaining the variance in views towards abortion is actually sexual strategy: whether one is more interested in short-term or long-term sexual relationships. Those who take the more short-term strategy are less interested in investing in relationships and their associated costs – like the burdens of pregnancy – and accordingly tend to favor policies and practices that reduce said costs, like available contraceptives and abortions. However, those playing a more long-term strategy are faced with a problem: if the costs to sex are sufficiently low and people are more promiscuous because of that, the value of the long-term relationships declines. This leads those attempting to invest in long-term strategies to support policies and practices that make promiscuity costlier, such as outlawing abortion and making contraceptives difficult to obtain. To the extent that gender can predict views on abortion (which is not very well to begin with), that connection is likely driven predominately by other variables not exclusive to gender.

We are again posed with the matter of why these fallacies are committed here. My feeling is that the tactic being used here is, as before, the manipulation of association values. By attempting to turn abortion into a gendered issue – one which benefits women, no less – the message that’s being sent is that if you oppose abortion, you also oppose most women. In essence, it attempts to make the opposition to abortion appear to be a more powerfully negative signal. It’s not just that you don’t favor abortion; it’s that you also hate women. The often-unappreciated irony of this tactic is that it serves to, at least in part, discredit the idea that we live in a deeply misogynistic society that is biased against women. If the message here is that being a misogynist is bad for your reputation, which it would seem to be, it would seem that state of affairs would only hold in a society where the majority of people are, in fact, opposed to misogyny. Were we to use a sports analogy, being a Yankee’s fan is generally tolerated or celebrated in New York. If that same fan travels to Boston, however, their fandom might now become a distinct cost, as not only are most people there not Yankee’s fans, but many actively despise their baseball rivals. The appropriateness and value of an attitude depends heavily on one’s social context. So, if the implication that one is a misogynist is negative, that tells you something important about the values of wider culture in which the accusation is made. 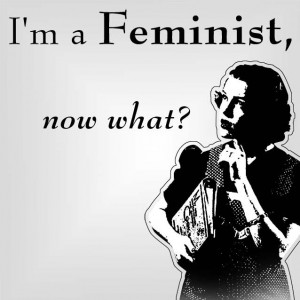 Unlike that degree in women’s studies.

I suppose the positive message to get from all this is that attitudes towards women aren’t nearly as negative as some feminists make them out to be. People tend to believe in equality – in the vague sense, anyway – whether or not they consider themselves feminists, and misogyny – again, in the vague sense – is considered a bad thing. However, if the perceptions about those things are open to manipulation, and if those perceptions can be used to persuade people to help you achieve your personal goals, we ought to expect people – feminist and non-feminist alike – to try and take advantage of that state of affairs. The point in these arguments, so to speak, is to be persuasive; not to be accurate (Mercier & Sperber, 2011). Accuracy only helps insomuch as it’s easier to persuade people of true things, relative to false ones.

4 comments on “Two Fallacies From Feminists”