In the fairly-recent past, there was a viral video being shared across various social media sites called “This is Water” by David Foster Wallace. The beginning of the speech tells a story of two fish who are oblivious to the water in which they exist, in much the same way that humans come to take the existence of the air they breathe for granted. The water is so ubiquitous that the fish fail to notice it; it’s just the way things are. The larger point of the video – for my present purposes – is that the inferences people make in their day-to-day lives are so automatic as to become taken for granted. David correctly notes that there are many, many different inferences that one could make about people we see in our every day lives: is the person in the SUV driving it because they fear for their safety or are they selfish for driving that gas-guzzler? Is the person yelling at their kids not usually like that, or are they an abusive parent? There are two key points in all of this. The first is the aforementioned habit people have to take the ability we have to draw these kinds of inferences in the first place for granted; what Cosmides & Tooby (1994) call instinct blindness. Seeing, for instance, is an incredibly complex and difficult-to-solve task, but the only effort we perceive when it comes to vision involves opening our eyes: the seeing part just happens. The second, related point is the more interesting part to me: it involves the underdetermination of the inferences we draw from the information we’re provided. That is to say that no part of the observations we make (the woman yelling at her child) intrinsically provides us with good information to make inferences with (what is she like at other times).

Was Leonidas really trying to give them something to drink?

There are many ways of demonstrating underdetermination, but visual illusions – like this one – prove to be remarkable effective in quickly highlighting cases where the automatic assumptions your visual systems makes about the world cease to work. Underdetermination isn’t just a problem need to be solved with respect to vision, though: our minds make all sorts of assumptions about the world that we rarely find ourselves in a position to appreciate or even notice. In this instance, we’ll be considering some of the information our mind automatically fills in concerning the actions of other people. Specifically, we perceive our world along a dimension of intentionality. Not only do we perceive that individuals acted “accidentally” or “on purpose”, we also perceive that individuals acted to achieve certain goals; that is, we perceive “motives” in the behavior of others.

Knowing why others might act is incredibly useful for predicting and manipulating their future behavior. The problem that our minds need to solve, as you can no doubt guess by this point, is that intentions and motives are not readily observable from actions. This means that we need to do our best to approximate them from other cues, and that entails making certain assumptions about observable actions and the actors who bring them about. Without these assumptions, we would have no way to distinguish between someone killing in self-defense, killing accidentally, or killing just for the good old fashion fun of it. The questions for consideration, then, concern which kinds of assumptions tend to be triggered by which kinds of cues under what circumstances, as well as why they get triggered by that set of cues. Understanding what problems these inferences about intentions and motives were designed to solve can help us more accurately predict the form that these often-unnoticed assumptions will likely take.

While attempting to answer that question about what cues our minds use, one needs to be careful to not lapse in the automatically-generated inferences our minds typically make and remain instinct-blind. The reason that one ought to avoid doing this – in regards to inferences about intentions and motives – is made very well by Gawronski (2009):

In other words, people often attempt to explain whether or not someone acted intentionally by referencing motives (“he intended to harm X because he stood to benefit”), and they also often attempt to explain someone’s motives on the basis of whether or not they acted intentionally (“because he stood to benefit by harming X, he intended harm”). On top of that, you might also notice that inferences about motives and intentions are themselves derived, at least in part, from other, non-observable inferences about talents and planning. This circularity manages to help us avoid something resembling a more-complete explanation for what we perceive. 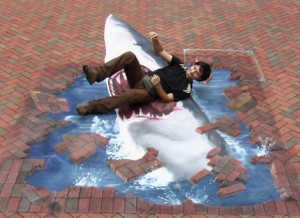 “It looks three-dimensional because it is, and it is 3-D because it looks like it”

Even if we ignore this circularity problem for the moment and just grant that inferences about motives and intentions can influence each other, there is also the issue of the multiple possible inferences which could be drawn about a behavior. For instance, if you observe a son push his father down the stairs and kill him, one could make several possible inferences about motives and intentions. Perhaps the son wanted money from an inheritance, resulting in his intending to push his father to cause death. However, pushing his father not only kills close kin, but also carries the risk of a punishment. Since the son might have wanted to avoid punishment (and might well have loved his father), this would result in his not intending to push his father and cause death (i.e. maybe he tripped, which is what caused him to push). Then again, unlikely as it may sound, perhaps the son actively sought punishment, which is why he intended to push. This could go on for some time. The point is that, in order to reach any one of these conclusions, the mind needs to add information that is not present in the initial observation itself.

This leads us to ask what information is added, and on what basis? The answer to this question, I imagine, would depend on the specific inferential goals of the perceiver. One goal is could be accuracy: people wish to try and infer the “actual” motivations and intentions of others, to the extent it makes sense to talk about such things. If it’s true, for instance, that people are more likely to act in ways that avoid something like their own bodily harm, our cognitive systems could be expected to pick up on that regularity and avoid drawing the the inference that someone was intentionally seeking it. Accuracy only gets us so far, however, due to the aforementioned issue of multiple potential motives for acting: there are many different goals one might be intending to achieve and many different costs one might be intending to avoid, and these are not always readily distinguishable from one another. The other complication is that accuracy can sometimes get in the way of other useful goals. Our visual system, for instance, while not always accurate, might well be classified as honest. That is to say though our visual system might occasionally get things wrong, it doesn’t tend to do so strategically; there would be no benefit to sometimes perceiving a shirt as blue and other times as red in the same lighting conditions.

That logic doesn’t always hold for perceptions of intentions and motives, though: intentionally committed moral infractions tend to receive greater degrees of moral condemnation than unintentional ones, and can make one seem like a better or worse social investment. Given that there are some people we might wish to see receive less punishment (ourselves, our kin, and our allies) and some we might wish to see receive more (those who inflict costs on us or our allies), we ought to expect our intentional systems to perceive identical sets of actions very differently, contingent on the nature of the actor in question. In other words, if we can persuade others about our intentions and motives, or the intentions and motives of others, and alter their behavior accordingly, we ought to expect perceptual biases that assist in those goals to start cropping up. This, of course, rests on the idea that other parties can be persuaded to share your sense of these things, posing us with related problems like under what circumstances does it benefit other parties to develop one set of perceptions or another? 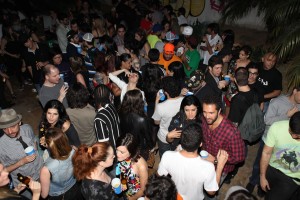 How fun this party is can be directly correlated to the odds of picking someone up.

I don’t pretend to have all the answers to questions like these, but they should serve as a reminder that the our minds need to add a lot of structure to the information they perceive in order to do many of the things of which they are capable. Explanations for how and why we do things like perceive intentionality and motive need to be divorced from the feeling that such perceptions are just “natural” or “intuitive”; what we might consider the experience of the word “duh”. This is an especially large concern when you’re dealing with systems that are not guaranteed to be accurate or honest in their perceptions. The cues that our minds use to determine what the motives people had when they acted and what they intended to do are by no means always straightforward, so saying that inferences are generated by “the situation” is unlikely to be of much help, on top of just being wrong.

One comment on “This Is Water: Making The Familiar Strange”