Today, I wanted to discuss the topic of guilt; specifically, what the emotion is, whether we should consider it to be a moral emotion, and whether it generates moral behavioral outputs. The first part of that discussion will be somewhat easier to handle than the latter. In the most common sense, guilt appears to an emotion aroused by the perception of wrong-doing which has harmed someone else on the part of the individual experiencing guilt. The negative feelings that accompany guilt often lead to the guilty party desiring to make amends to the injured one so as to compensate the damage done and repair the relationship between the two (e.g., “I’m sorry that totaled your car by driving it into your house; I feel like a total heel. Let me buy you dinner to make up for it”). Because the emotion appears to be aroused by the perceptions of a moral transgression – that is, someone feels they have done something wrong, or impermissible –  it seems like guilt could rightly be considered a moral emotion; specifically, an emotion related to moral conscience (a self regulating mechanism), rather than moral condemnation (an other regulating mechanism).

Nothing beats packing for a nice, relaxing guilt trip

The understanding that guilt is a moral emotion, then, allows us to inform our opinion about what kind of thing morality is by examining how guilt works in greater, proximate detail. In other words, we can infer what adaptive value our moral sense might have had through studying the form of the emotional guilt mechanisms: what inputs they use and what outputs they produce. This brings us to some rather interesting work I recently dug out of my backlog of papers to read, by de Hooge et al (2011), that focused on figuring out what kinds of effects guilt tends to have on people’s behavior when you take guilt out of a dyadic (two-person) relationship and drop it into larger groups of people. The authors were interested, in part, on deciding whether or not guilt could be classified as a morally good emotion. While they acknowledge guilt is a moral emotion, they question whether it produces morally good outcomes in certain types of situations.

This leads naturally to the following question: what is a morally good outcome? The answer to that question is going to depend on what type of function one thinks morality has. In this case, de Hooge et al (2011) write as if our moral sense is an altruism device – one that functions to deliver benefits to others at a cost to one’s self. Accordingly, a morally good outcome is going to be one that results in benefits flowing to others at a cost to the actor. Framed in terms of guilt, we might expect that individuals experiencing guilt will behave more altruistically than individuals who are not; the guilty’s regard for the welfare of others will be regulated upwards, with a corresponding down-regulation placed on their own welfare. The authors note that much of the previous research on guilt has uncovered evidence consistent with that pattern: guilty parties tend to forgo benefits to themselves or suffer costs in order to deliver benefits to the party they have wronged. This makes guilt look rather altruistic.

Such research, however, was typically conducted in a two-party context: the guilty party and their victim. This presents something of an interpretative issue, inasmuch as the guilty party only has that one option available to them: if, say, I want to make you better off, I need to suffer a cost myself. While that might make the behavior look altruistic in nature, in the social world that we reside within, that is usually not the only option available; I could, for instance, also make you better off not at an expense to myself, but rather at the expense of someone else; an outcome most people wouldn’t exactly call altruism, and one de Hooge et al (2011) wouldn’t consider morally good either. To the extent a guilty party is interested in making their victim better off in both case, both outcomes would look the same in a two-party case; to the extent the guilty party is interested in behaving altruistically towards the victimized party, though, things would look different in a three-party context. 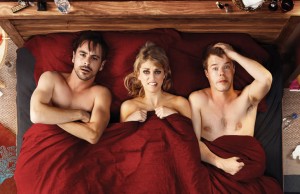 As they usually do…

de Hooge et al (2011) report on the results of three pilot studies and four experiments examining how guilt affects behavior in these three-party contexts in terms of welfare-relevant choices. While I don’t have time to discuss all of what they did, I wanted to highlight one of their experiments in more detail while noting that each of them generated data consistent with the same general pattern. The experiment I will discuss is their third one. In that experiment, 44 participants were assigned to either a guilt or a control condition. In both conditions, the participants were asked to complete a two-part joint effort task with another person to earn payment rewards. Colored letters (red or green) would pop up on each player’s screens and the participant and their partner had to click a button quickly in order to complete the task: the participant would push the button if the letter was green, whereas their partner would have to push if the letter was red. In the first part of the task, the performance of both the participant and their partner would be earning rewards for the participant; in the second part, the pair would be earning rewards for the partner instead. Each reward was worth 8 units of what I’ll call welfare points.

Out of the 8 welfare units the participants had earned, they opted to give an average of 2.2 of them to their partner in the guilt condition, but only 1 unit in the control condition, so guilt did seem to make the participants somewhat more altruistic. Interestingly, however, guilt made participants even more willing to take from the outside party: guilty parties took an average of 4.2 units from the third party for their partner, relative to the 2.5 units they took in the control condition. In short, the participants appeared to be interested in repairing the relationship between themselves and their partners, but were more interested in doing so via taking from someone else, rather than giving up their own resources. Participants also viewed the welfare of the third party as being relatively unimportant as compared to the welfare of the partner they had ostensibly failed. 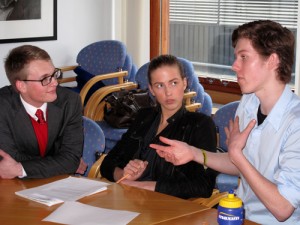 “To make up for hurting Mike, I think it’s only fair that Karen here suffers”

This returns us to the matter of what kind of thing morality is. de Hooge et al (2011) appear to view morality as an altruism device and view guilt as a moral emotion, yet, strangely, guilt did not appear to make people substantially more altruistic; instead, it seems to make them partial. Given that guilt was not making people behave more altruistically, we might want to reconsider the adaptive function of morality. What if, rather than acting as an altruism device, morality functions as an association management mechanism? If our moral sense functions to build and manage partial relationships, benefiting someone you’ve harmed at the expense of other targets of investment might make more sense. This is because there are good reasons to suspect that friendships represent partial allies maintained in the service of being able to win potential future disputes (DeScioli & Kurzban, 2009). These partial alliances are rank-ordered, however: I have a best friend, close friends, and more distant ones. In order to signal that I rank you highly as a friend, then, I need to demonstrate that I value you more than other people. Showing that I value you highly relative to myself – as would be the case with acts of altruism – would not necessarily tell you much about your value as my friend, relative to other friends. By contrast, behaving in ways that signal I value you more than others at least temporarily – as appeared to be the case in current experiments – could serve to repair a damaged alliance. Morality as an altruism device doesn’t fit the current pattern of data; an alliance management device does, though.