Having recently returned from the Human Behavior & Evolution Society’s (HBES) conference, I would like to take a moment to let everyone know what an excellent time I had there. Getting to meet some of my readers in person was a fantastic experience, as was the pleasure of being around the wider evolutionary research community and reconnecting with old friends. The only negative parts of the conference involved making my way through the flooded streets of Miami on the first two mornings (which very closely resembled this scene from the Simpsons) and the pool party at which I way over-indulged in drinking. Though there was a diverse array of research presented spanning many different areas, I ended up primarily in the seminars on cooperation, as the topic tends most towards my current research projects. I would like to present two of my favorite findings from those seminars, which serve as excellent cautionary tales concerning what conclusions one can draw from economic games. Despite the popular impression, there’s a lot more to evolutionary psychology than sex research. 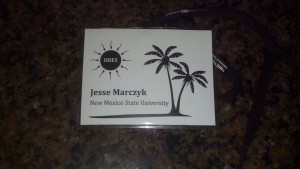 Though the Sperm-Sun HBES logo failed to adequately showcase that diversity.

The first game to be discussed is the classic dictator game. In this game, two participants are brought into the lab and assigned the role of either ‘dictator; or ‘recipient’. The dictator is given a sum of money (say, $10) and is given the option to divide it however they want between the pair. If the dictator was maximally selfish – as standard economic rationality might suggest – they would consistently keep all the money and given none to the recipient. Yet this is not what we frequently see: dictators tend to give at least some of the money to the other person, and an even split is often made. While giving these participants anonymity from one another does tend to reduce offers, even ostensibly anonymous dictators continue to give. This result clashes somewhat with our every day experiences: after all, provided we have money in our pocket, we’re faced with possible dictator-like experiences every time we pass someone on the street, whether they’re homeless and begging for money or apparently well-off. Despite the near-constant opportunities during which we could transfer money to others, we frequently do not. So how do we reconcile the two experimental and everyday results?

One possibility is to suggest that the giving in dictator games is largely induced by experimental demand effects: subjects are being placed into a relatively odd situation and are behaving rather oddly because of it (more specifically, because they are inferring what the experimenter “wants” them to do). Of course, it’s not so easy to replicate the effects the contexts of the dictator game (a sudden windfall of a divisible asset and a potential partner to share it with) without subjects knowing they’re talking part in an experiment. Winking & Mizer (2013) manged to find a way around these problems in Las Vegas. In this field experiment, a confederate would be waiting at a bus stop when the ignorant subject approached. Once the subject was waiting for the bus as well, the confederate would pretend to take a phone call and move slightly away from the area with their back turned to the subject. It was at this point that the experiment approached on his cell, ostensibly in a hurry. As the experimenter passed the subject, he gave them $20 in poker chips, saying that he was late for his ride to the airport and didn’t have time to cash them in. These casino chips are an excellent stimuli, as they provided a good cover story for why they were being handed over: they only have value when cashed in, and the experimenter didn’t have time to do so. Using actual currency wouldn’t work well, as it might raise suspicions about the setup, since currency travels well from place to place.

In the first condition, the experimenter left and the confederate returned without further instruction; in the second condition, the experimenter said, “I don’t know. You can split them with that guy however you want” while gesturing at the confederate before he ran off. A third condition involved an explicit version of the dictator game experiment with poker chips, during which anonymity was granted. In the standard version of the experiment – when the subjects knew about the game explicitly – 83% of subjects offered at least some of the chips to other people with a median offer around $5, resembling previous experimental results fairly well. How about the other two conditions? Well, of the 60 participants who were not told they were explicitly taking part in the game, all of them kept all the money. This suggests very strongly that all – or at least most – of the giving we observe in dictator games is grounded in the nature of the experiment itself. Indeed, many of the subjects in the first condition, where the instruction to split was not given, seemed rather perplexed by the purpose of the study during the debriefing. The subjects wondered precisely why in the world they would split the money with the confederate in the first place. Like all of us walking down the street with money on our person, the idea that they would just give that money to other people seemed rather strange. 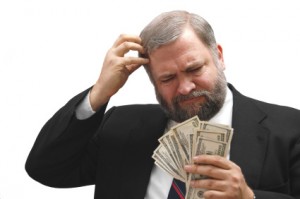 “I’m still not following: you want to do what with all this money, again?”

The second paper of interest looked at behavior in another popular game: the public goods game. In these games, subjects are typically placed together in groups of four and are provided with a sum of money. During each round, players can invest any amount of their money in the public pot and keep the rest. All the money in the pot is then multiplied by some amount and then divided equally amongst all the participants. In this game, the rational economic move is typically to not put any money in, as for each dollar you put in, you receive less than a dollar back (since the multiplier is below the number of subjects in the group); not a great investment. On the other hand, the group-maximizing outcome is for all the subjects to donate all their money, so everyone ends up richer than when they started. Again, we find that subjects in these games tend to donate some of their money to the public pot, and many researchers have inferred from this giving that people have prosocial preferences (i.e. making other people better off per se increases my subjective welfare). If such an inference was correct, then we ought to expect that subjects should give more money to the public good provided they know how much good they’re doing for others.

Towards examining this inference, Burton-Chellew & West (2013) put subjects into a public goods game in three different conditions. First, there was the standard condition, described above. Second was a condition like the standard game, except subjects received an additional piece of information in the form of how much the other players in the game earned. Finally, there was a third condition in which subjects didn’t even know the game was being played with other people; subjects were merely told they could donate some fraction of their money (from 0 to 40 units) to a “black box” which would perform a transformation on the money received and give them a non-negative payoff (which was the same average benefit they received in the game when playing with other people, but they didn’t know that). In total, 236 subjects played in one of the first two conditions and also in the black box condition, counterbalancing the order of the games (they were informed the two were entirely different experiments).

How did contributions change between the standard condition and the black box condition over time? They didn’t. Subjects that knew they were playing a public goods game donated approximately as much during each round as the subjects who were just putting payments into the black box and getting some payment out: donations started out relatively high, and declined over time (presumably and subjects were learning they tended to get less money by contributing). The one notable difference was in the additional information condition: when subjects could see the earnings of others, relative to their contributions, subjects started to contribute less money to the public good. As a control condition, all the above three games were replicated with a multiplication rule that led the profit-maximizing strategy to being donate all of one’s available money, rather than none. In these conditions, the change in donations between standard and black box conditions again failed to differ significantly, and contributions were still lower in the enhanced-information condition. Further, in all these games subjects tended to fail to make the profit-maximizing decision, irrespective of whether that decision was to donate all their money or none of it. Despite this strategy being deemed relatively to “easy” to figure out by researchers, it apparently was not.

Other people not included, or required

Both of these experiments pose some rather stern warnings about the inferences we might draw from the behavior of people playing economic games. Some our our experiments might end up inducing certain behaviors and preferences, rather than revealing them. We’re putting people into evolutionarily-strange situations in these experiments, and so we might expect some evolutionarily-strange outcomes. It is also worth noting that just because you observe some prosocial outcome – like people giving money apparently altruistically or contributing to the good of others – it doesn’t follow that these outcomes are the direct result of cognitive modules designed to bring them about. Sure, my behavior in some of these games might end up reducing inequality, for instance, but it doesn’t following that people’s psychology was selected to do such things. There are definite limits to how far these economic games can take us inferentially, and it’s important to be aware of them. Do these studies show that such games are worthless tools? I’d say certainly not, as behavior in them is certainly not random. We just need to be mindful of their limits when we try and draw conclusions from them.

References: Burton-Chellew MN, & West SA (2013). Prosocial preferences do not explain human cooperation in public-goods games. Proceedings of the National Academy of Sciences of the United States of America, 110 (1), 216-21 PMID: 23248298