There’s a saying in economics that goes, “A rising tide lifts all ships”. The basic idea behind the saying is that marginal benefits that accrue from people exchanging goods and services is good for everyone involved – and even for some who are not directly involved – in much the same way that all the boats in a body of water will rise or fall in height together as the overall water level does. While there is an element of truth to the saying (trade can be good for everyone, and the resources available to the poor today can, in some cases, be better than those available to even the wealthy in generations past), economies, of course, are not like bodies of water that rise and fall uniformly; some people can end up radically better- or worse-off than others as economic conditions shift, and inequality is a persistent factor in human affairs. Inequality – or, more aptly, the perception of it – is also commonly used as a justification for furthering certain social or moral goals. There appears to be something (or somethings) about inequality that just doesn’t sit well with people. 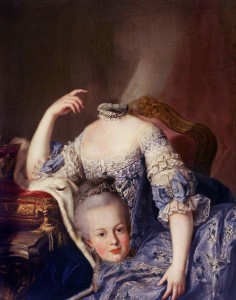 And I would suggest that those people go and eat some cake.

People’s ostensible discomfort with inequality has not escaped the eyes of many psychological researchers. There are some who suggest that humans have a preference for avoiding inequality; an inequality aversion, if you will. Phrased slightly differently, there are some who suggest that humans have an egalitarian motive (Dawes et al, 2007) that is distinct from other motives, such as enforcing cooperation or gaining benefits. Provided I’m parsing the meaning of the phrase correctly, then, the suggestion being made by some is that people should be expected to dislike inequality per se, rather than dislike inequality for other, strategic reasons. Demonstrating evidence of a distinct preference for inequality aversion, however, can be difficult. There are two reasons for this, I feel: the first is that inequality is often confounded with other factors (such as someone not cooperating or suffering losses). The second reason is that I think it’s the kind of preference that we shouldn’t expect to exist in the first place.

Taking these two issues in order, let’s first consider the paper by Dawes et al (2007) that sought to disentangle some of these confounding issues. In their experiment, 120 subjects were brought into the lab in groups of 20. These groups were further divided into anonymous groups of 4, such that each participant played in five rounds of the experiment, but never with the same people twice. The subjects also did not know about anyone’s past behavior in the experiment. At the beginning of each round, every subject in each group received a random number of payment units between some unmentioned specific values, and everyone was aware of the payments of everyone else in their group. Naturally, this tended to create some inequality in payments. Subjects were given means by which to reduce this inequality, however: they could spend some of their payment points to either add or subtract from other people’s payments at a ratio of 3 to 1 (in other words, I could spend one unit of my payment to either reduce your payment by three points or add three points to your payment). These additions and deductions were all decided on in private an enacted simultaneously, so as to avoid retribution and cooperation factors. It wasn’t until the end of each round that subjects saw how many additions and reductions they had received. In total, each subject had 15 chances to either add to or deduct from someone else payment (3 people per round over 5 rounds).

The results showed that most subjects paid to either add to or deduct from someone else’s payment at least once: 68% of people reduced the payment of someone else at least once, whereas 74% increased someone’s payment at least once. It wasn’t what one might consider a persistent habit, though: only 28% reduced people’s payment more than five times, while 33% added, and only 6% reduced more than 10 times, whereas 10% added. This, despite their being inequality to be reduced in all cases. Further, an appreciable number of the modifications didn’t go in the equality-reducing direction: 29% of reductions went to below-average earners, and 38% of the additions went to above-average earners. Of particular interest, however, is the precise way in which subjects ended up reducing inequality: the people who earned the least in each round tended to spend 96% more on deductions than top earners. In turn, top earners averaged spending 77% more on additions than the bottom earners. This point is of interest because positing a preference for avoiding inequality does not necessarily help one predict the shape that equality will ultimately take. 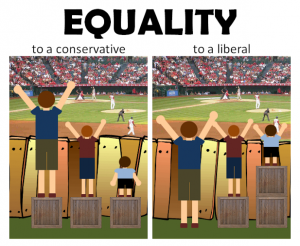 You could also cut the legs off the taller boys in the left picture so no one gets to see.

The first thing worth point out here, then, is that about half of all the inequality-reducing behaviors that people engaged in ended up destroying overall welfare. These are behaviors in which no one is materially better off. I’m reminded of part of a standup routine by Louis CK, concerning that idea, in which he recounts the following story (starting at about a 1:40):

“My five-year old, the other day, one of her toys broke, and she demanded I break her sister’s toy to make it fair. And I did.”

It’s important to note this so as to point out that achieving equality itself doesn’t necessarily do anything useful. It is not as if equality automatically makes everyone – or anyone – better off. So what kind of useful outcomes might such spiteful behavior result in? To answer that question, we need to examine the ways people reduced inequality. Any player in this game could reduce the overall amount of inequality by either deducting from high earners payment or adding to low earners. This holds for both the bottom and top earners. This means that there are several ways of reducing inequality available to all players. Low earners, for instance, could reduce inequality by engaging in spiteful reductions towards everyone above them until they’re all down at the same low level; they could also reduce the overall inequality by benefiting everyone above them, until everyone (but them) is at the same high level. Alternatively, they could engage in a mixture of these strategies, benefiting some people and harming others. The same holds for high earners, just in the opposite directions. Which path people would take depends on what their set point for ‘equal’ is. Strictly speaking, then, a preference for equality doesn’t tell us which method people should opt for, nor does it tell us what levels of inequality will be relatively accepted and efforts to achieve equality will cease.

There are, however, other possibilities for explaining these results beyond a preference for inequality per se. One particularly strong alternative is that people use perceptions of inequality as inputs for social bargaining. Consider the following scenario: two people are working together to earn a joint prize, like a $10 reward. If they work together, they get the $10 to split; if they do not work together, neither will receive anything. Further, let’s assume one member of this pair is greedy, and in round one, after they cooperate, takes $9 of the pot for themselves. Now, strictly speaking, the person who received $1 is better off than if they received nothing at all, but that doesn’t mean they ought to accept that distribution, and here’s why: if the person with $1 refuses to cooperate during the next round, they only lose that single dollar; the selfish player would lose out on nine-times as much. This asymmetry in losses puts the poorer player in a stronger bargaining position, as they have far less to lose from not cooperating. It is from bargaining structures similar in structure to this that our sense of fairness likely emerged.

So let’s apply this analysis back to the results of the experiment: people all start off with different amounts of money and people are in positions to benefit or harm each other. Everyone wants to leave with as much benefit as possible, which means contributing nothing and getting additions from everyone else. However, since everyone is seeking this same outcome and they can’t all have it, certain compromises need to be reached. Those in high-earning positions face a different set of problems in that compromise than those in low-earning positions: while the high earners are doing something akin to trying to maintain cooperation by increasing the share of resources other people get (as in the previous example), low earners are faced with the problem of negotiating for a better payoff, threatening to cut off cooperation in the process. Both parties seem to anticipate this, with low earners disproportionately punishing high earners, and high earners disproportionately benefiting low earners. That there is no option for cooperation or bargaining present in this experiment is, I think besides the point, as our minds were not designed to deal with the specific context presented in the experiment. Along those same lines, simply telling people that “you’re now anonymous” doesn’t mean that their mind will automatically function as if it was positive no one could observe its actions, and telling people their computer can’t understand their frustration won’t stop them from occasionally yelling at it. 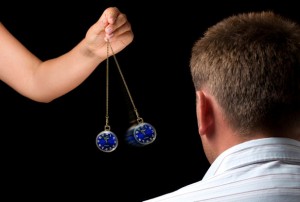 As a final note, one should be careful about inferring a motive or preference for equality just because inequality was sometimes reduced. A relatively simple example should demonstrate why: consider an armed burglar who enters a store, points their gun at the owner, and demands all the money in the register. If the owner hands over the money, they have delivered a benefit to the burglar at a cost to themselves, but most of us would not understand this as an act of altruism on the part of the owner; the owner’s main concern is not getting shot, and they are willing to pay a small cost (the loss of money) so as to avoid a larger one (possible death). Other research has found, for instance, that when given the option to pay a fixed cost (a dollar) to reduce another person’s payment by any amount (up to a total of $12), when people engage in reduction, they’re highly likely to generate inequality that favors themselves. (Houser & Xiao, 2010). It would be inappropriate to suggest that people are equality-averse from such an experiment, however, and, more to the point, doing so wouldn’t further our understanding of human behavior much, if at all. We want to understand why people do certain things; not simply that they do them.