Humans face the adaptive problem of forming and maintaining social bonds with others. Our ability to bond is rather extraordinary. As one example of our capacity to bond, like many people, I am a (habitual) pet owner. My personal preference – though I like most mammals – is towards cats, and I’ve had at least one cat for about as long as I can remember. Also, like many pet owners, I have a habit of holding, hugging, and kissing my cats. Though I can’t say for certain, my intuition is that this affiliation is mutually pleasurable: when I return home after some time out, my cat will greet me with a series of meows, purrs, and rubs; she will even crawl into my lap while I’m sitting at my computer. The relationship between pets and owners often appears to resemble the relationship parents have towards children in a number of respects and it should come as no surprise, then, that we often also observe parents touching, hugging and kissing their children. While people don’t need to bond with animals socially, we often can as a byproduct of our ability to bond with other people (in this case, probably offspring). 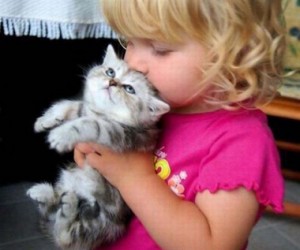 And since one won’t need college, the superior bonding choice is clear

Figure 1: Not what the distribution of sexual orientation looks like

This would predict that sexual orientation follows something of a normal distribution – with most people being bisexual – which it clearly doesn’t. Instead, sexual orientation is heavily skewed towards heterosexual (as one should expect from a fitness standpoint), with around 97-99% of people identifying as such. The distribution problem is even worse when considering male sexual orientation, which finds most men reporting a heterosexual orientation, homosexual being second most common, and very few indicating being bisexual. This is not the kind of variation you see in many other adaptations (like height, which is much more normally distributed, like the above graph). It is possible, I suppose, that there exist many more male bisexuals out there than the surveys typically find; Fleischman, Fessler, & Cholakians (2014) suggest that many (male) bisexuals don’t want to admit to their bisexuality owing to some social stigma against it. While that’s possible, I don’t think we want to venture into the realm of question begging in the interests of making the available evidence fit the theory.

On the topic of social stigma, though, if the function of homoerotic behavior is to bond with others socially, it seems peculiar that so many moral injunctions against homosexual behavior exist in many cultures worldwide. Yes, the tolerance of such behavior does vary across time and place, but that people condemn it at all seems rather strange if the function is social bonding; surely everyone wants to be able to make friends. It’s even stranger because people don’t seem to be condemning other acts of social bonding, like doing favors or exchanging gifts; they seem to condemn the sexual thoughts and behaviors associated with same-sex erotic behavior. Even if it’s the case that homoerotic behaviors might have only become condemned in relatively recent times (I don’t know if that’s true or not), that would still leave us with the matter of why there was an uptick in homoerotic condemnation.

Even more peculiar is that same-sex behavior appears to be quite rare if it functions as an affiliation-building mechanism. By that I don’t mean that many people haven’t engaged in something resembling homoerotic behavior (like a man kissing a man on the lips) at any point in their life, but rather that I feel we should see otherwise-straight male friends (especially good friends) kissing each other goodbye (erotically) every day, or male businessmen engaging in some light genital petting after a meeting to keep up the impression of being a friendly, valuable asset to one another. If homoerotic behavior helped cement social bonds, it seems like it should be as common as handshakes or hugs. Perhaps such practices are more common elsewhere in the world that I am unaware of, but that they are not much more common than they appear to be, at least here in the US, seems out of place if the bonding explanation is true.

I say that because if we were talking about another adaptation – like vision – we might be curious if we found that one-in-four males had the ability to see (at some point in their life), whereas the remaining 80% of men were blind. Adaptions – because of their reproductive benefits – tend to be common (generally universal) in populations. This is why pretty much everyone has two hands and a functioning liver, barring some environmental insult. Yet homoerotic behavior is anything but ubiquitous. Kirkpatrick (2000) cites a number of studies finding that around 20% of men (and women, but let’s stick to the men for now) report having homosexual intercourse at some point in their lives (though most of this behavior – about two thirds of it – seems to take place before the age of 19). Assuming these numbers are representative, that people found all of those encounters erotic even when they were younger children, and that the behavior wasn’t coerced by others, we would still be looking at around 4 out of 5 males who have never engaged in homosexual intercourse at any point in their life. For a purported adaptation with social benefits, this seems strange; why would 80% (or 93% if we’re talking about 19+ year olds) of the male population be foregoing the social-bonding benefits of a bit of buggery? 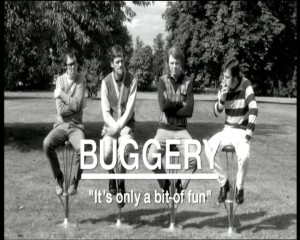 That’s what I’ve been saying; you just have to convince my good buddies.

We could, as Fleischman, Fessler, & Cholakians (2014) do, expand the definition away from just homoerotic intercourse to behavior that doesn’t include the genitals, but this (a) runs us back into the problem that most men don’t seem to be kissing their good friends good-bye erotically and (b) that we should expect behavior that resulted in orgasm to be more rewarding – and thus bonding – than non-orgasmic results, if I follow the logic here correctly. No matter how I try to slice it, I keep ending up at the idea that, if homoerotic behavior functions to cement social bonds – that we should be seeing a lot more of it in terms of prevalence, frequency, and intensity. As it stands, it’s as if most of the male population doesn’t seem to want to improve their social bonds, which would be odd.

Separating the variables into more distinctly mate-selection and friend-selection driven might be difficult – as many of the qualities that make one a good mate, like kindness, might also make one a good friend – but I’m sure that analysis could be taken in a number of interesting directions.